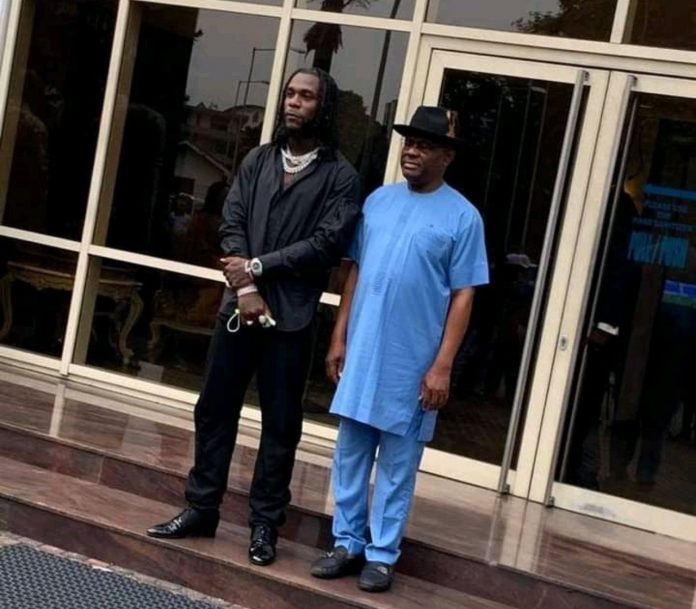 Nigerians have taken to Twitter to criticize the Governor of Rivers State, Nyesom Wike, for promising to give N10m each to Burna Boy and other artistes who performed at the Burna Boy Homecoming Concert in Port Harcourt.

However, his comment did not sit down well with some Nigerians as they took to Twitter to slam the Governor. So far, Wike is trending at number two on the Nigerian Twitter space with over 9,500 tweets.

Twitter user, @therealdaddymo1, expressed his displeasure as he tweeted, “When they say Nigerians deserve the leaders it gets, this is part of why they say that. Gov Wike is so confident and unashamed to be paying artistes from government funds and people are hailing him but turn round and also criticize corruption in the same breath?”

Morris MonyeBlue with the handle, @Morris_Monye, showed her disappointment at the governor’s statement by simply tweeting, “Very irresponsible from Wike!”

The Twitter user, @DOlusegun, wrote, “When they say Buhari is not working, This is what they mean. They miss the government of share the money which is why @burnaboy could not politely ask Wike to use that money to pay the five-year unpaid salaries of teachers in demonstration schools in Rivers.

Wale Adetona with the verified Twitter handle @iSlimfit stated, “The impulse gifting by Governor Wike is so unnecessary for a state that has failed to pay gratuity & pension.”

Also, Daniel Regha lamented via his handle @DanielRegha as he wrote, “Wike is owing workers 5 yrs salaries but he’s promising to give each artiste who performed at Burna’s homecoming N10m each plus he’s gifting Burna land in Old GRA, Port Harcourt and money to build it cos Burna won ordinary Grammy; Misplaced priorities. Burna should reject the gift.”