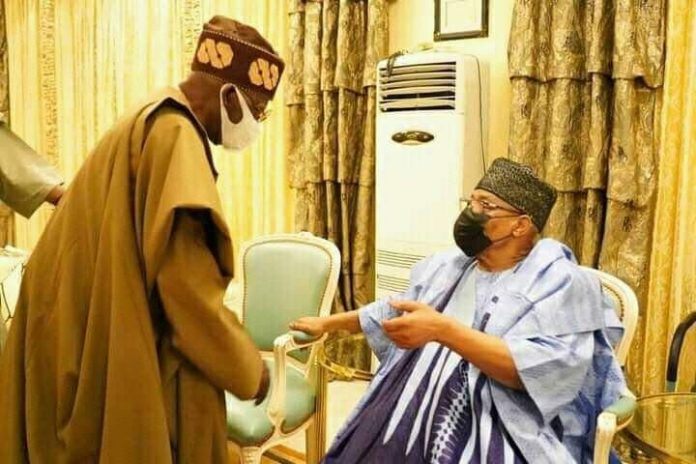 Bola Tinubu, the presidential candidate of the All Progressives Congress (APC) has visited former Military President Ibrahim Badamasi Babangida.
The meeting it was gathered took place on Monday.
It was gathered that the former Governor of Lagos State met with Babangida, popularly known as IBB, behind closed doors at his Top Hill residence in Minna, the Niger State capital.

Tinubu was accompanied to the meeting by his running mate, Kashim Shettima; the Director General of the APC Presidential Campaign Council, Simon Lalong, and the host Governor, Sani Bello.
Others are Governor Atiku Bagudu of Kebbi State, Governor Abubakar Badaru of Jigawa State, and Niger state APC governorship candidate, Umar Bago, among others.
After visiting the former Head of State, Tinubu met with farmers and some Agro-Commodity groups to unveil his action plan for the agricultural sector.
The APC Presidential candidate met with the farmers and agro-commodity groups at a town hall meeting held at Idris Legbo Kutigi Conference Hall in Minna.
Speaking at the meeting, Tinubu promised to turn around the agricultural sector in the country and provide modern farm implements at subsidized rates to farmers across the country if elected as President in 2023.
He also appointed the Chairman of the Progressive Governors’ Forum and Kebbi State Governor, Atiku Bagudu, to head a committee to fashion a blueprint that will help position the agric sector to occupy its deserved pride of place.