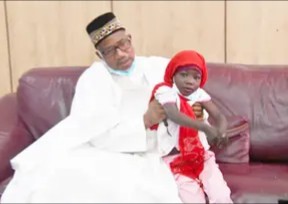 A six-year-old-girl, Hawa’u, whose genitals were mutilated by two men four months ago in Jama’are Local Government Area of Bauchi State has recovered.

She was discharged from hospital and reunited with her family.

Franktalknow learnt that last December, the suspects, 20-year-old Adamu Abdul Ra’uf and 19-year-old Abdukadir Wada Haladu of Gandu area in Jama’are town, lured little Hawa’u into an uncompleted building where they cut off her genitals for ritual purposes.

She was rushed to Aminu Kano University Teaching Hospital in Kano for treatment at the instance of the State Governor, Bala Mohammed.

Hawa’u was handed over to the Bauchi State Governor Mohammed at the Government House by State Commissioner of Health, Dr Aliyu Mohammed Maigoro in company of her parents.

Mohammed, who stated that communities must stand up to stop “this dehumanising act of savagery”, said the government could not do it alone.

He advised the parents to make sure that they don’t allow little Hawa’u to be alone or to be sent on errands or to be out of school.