Home General and News updates Adebanjo to Nigerians: At 94, I May Not Be Alive, But You...
Facebook
Twitter
WhatsApp
Linkedin
Telegram 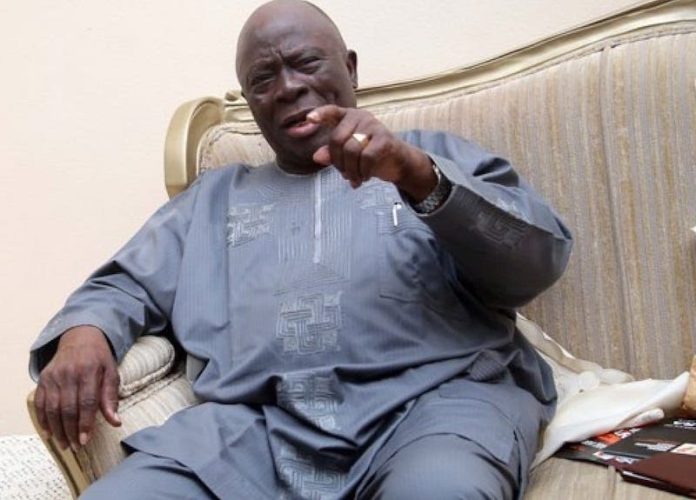 Acting Leader of the South-west renowned socio-political group, Afenifere, Chief Ayo Adebanjo, has warned Nigerians against voting for the Presidential Candidate of the All Progressive Congress (APC), Asiwaju Bola Tinubu, in the 2023 presidential poll, saying they would suffer if they made such a mistake.

Speaking on ARISE News Channel, Adebanjo said, at 94, he might not be alive to witness it but was certain Nigerians would live to suffer if they voted for any presidential candidate other than Mr. Peter Obi of the Labour Party (LP).

Adebanjo’s advice came in the wake of the seeming fraction in Afenifere, after Chief Reuben Fasoranti, a former leader of the group, and other prominent Yoruba leaders, reportedly endorsed Tinubu ahead of the 2023 presidential election.

However, reacting to the interview, a concerned Nigerian @Icebabio on Twitter wrote: “Mehn, Pa Adebanjo made me shed a tear. Pls Nigerians vote wisely. He says you all will suffer if you choose wrong while I enjoy in the grave. At 94, I have nothing to lose. Pls, Northerners and southerners, I beg you, don’t sell ur conscience for pottage

Another Tweep, @Strong Truth, wrote, “Pa Adebanjo makes me so proud to be a Yoruba man, I pray Obi emerge as the president of Nigeria come 2023. God bless you sir for speaking the truth to Nigeria.”

Also, @Yufsci, tweeted, “Pa Adebanjo at 94 is the only sensitive and sensible living Yoruba, all others are just foolish bigot. I go survive if Batiku becomes president. My problem is just d rebirth of new euphoria in Nigeria politics will be postponed, where we choose the best over religion and ethnicity.”