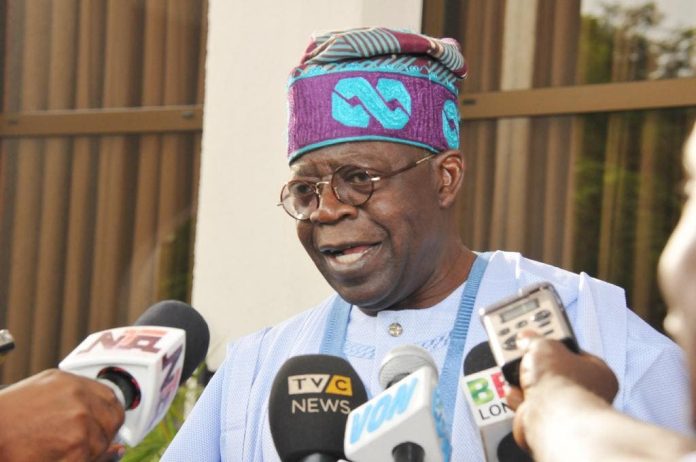 National leader of the All Progressives Congress (APC), Asiwaju Bola Ahmed Tinubu, has described First Lady Aisha Buhari as “a voice of conscience”.

Speaking at the Presidential Villa, Abuja, while chairing the public presentation of a book written in honour of the First Lady, Tinubu commended Aisha for her courage.

The book, “Aisha Buhari: Being different,” was written by the Senior Special Assistant to the President on Administration and Women Affairs, Dr Hajo Sani.

“Given the First Lady’s achievements, no one can reasonably question the role of a First Lady any longer. Remember there were those who argued that the constitution does not assign an official role to the First Lady. Because of Dr. Mrs. Aisha Buhari, their concerns have been forever laid to rest.

“The First Lady has played  an uplifting, unifying role both in symbol and substance. She has been a voice of conscience calling us to be our better selves for the good of the nation and for the betterment of the weakest, most vulnerable among us.

“As such she has been a strong pillar of support not only to the president but also to the Nigerian people whom they both serve with such patriotic commitment and high purpose. The role of the First Lady is instrumental to our society and to how a great number of our people relate to government. Custom and tradition may call to her in a certain way. Yet, the issues of the day may call to her in another. First Lady Aisha Buhari has done a masterful job melding the calls of tradition and the imperatives of today into a creative, benevolent role that has enriched society and the art of governance.

“She has been an active and dedicated voice to those whom society sometimes forgets. She gives comfort to the broken and seeks relief for the destitute. No one can doubt her concern. And her care for the wellbeing of women, children and the powerless has established the standard for the office of the First Lady for years to come.

“Mrs. Buhari shows that a First Lady should not stand aloof and detached from what is happening in the country. Mrs. Buhari never shies from what she believes in. This makes her a reliable and true advisor to her beloved husband. No doubt that Mr. President’s administration has been enriched because of her active role and the teamwork that exists between husband and wife,” he said.

Buhari, who is currently in London for a medical check-up, was represented by Prof Ibrahim Gambari, his Chief of Staff.

Vice-President Yemi Osinbajo; his wife, Dolapo, are among the dignitaries in attendance.

Aisha has been known for speaking against the perceived ills of her husband’s government.

While reacting Aisha’s allegation that his government had been hijacked, the president had said she belongs in his kitchen and the “other room”.

The allegation is one of the issues addressed in the book.