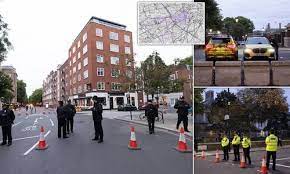 Supermarkets, restaurants, and retail stores are all shut this morning so workers can pay tribute to the Queen on the day of her state funeral.

The public bank holiday has seen a host of businesses lock up for the day – from everyday convenience shops to large tourist attractions.

Meanwhile, in London, road closures are in place across the city and some Tube stations are out of use due to the largest policing operation in the Met’s history.

A 12-mile ring of steel has been imposed in the heart of the capital along with the route the late monarch’s coffin will take to Windsor later today, where she will ultimately be laid to rest.

Tesco, Sainsbury’s, Morrisons, Lidl and Aldi are among those closing their supermarket stores for the day.

‘We want to express our deepest condolences to the royal family, as well as our gratitude to Her Majesty the Queen for her unwavering service,’ said Tesco’s UK chief executive Jason Tarry.

Other retailers including Sainsbury’s also said convenience stores and petrol stations will open from 5 pm.

Asda said it will shut its stores for the funeral, but all its supermarkets will open from 5 pm, with colleagues working on Monday evening to receive double pay.

Other high street retailers, such as Marks & Spencer and Primark, also said they will shut for the day, while cinema chains such as Cineworld and Odeon have announced plans to keep their venues shut, too.

Bin collections, driving tests and a number of hospital appointments have all also been scrapped, while there are closures at English Heritage and National Trust sites.

Popular holiday spot Center Parcs is closing its on-site facilities today, but guests are allowed to remain in lodges and walk around, despite bosses initially threatening to boot them out.

Despite the widespread closures, huge crowds flocked into central London this morning for the funeral service, with City Hall officials issuing a warning at 7.30 am.

It read: ‘The areas in and around Buckingham Palace, Westminster, Whitehall, St James’s Park, and Green Park are extremely busy.

‘If you are in the vicinity or arriving to watch Her Majesty The Queen’s State Funeral and procession, please be patient and follow the advice of stewards and police.’

Nevertheless, Downing Street has indicated that it is up to individual businesses how they approach the bank holiday.

The Prime Minister’s official spokesman said the day of the funeral will operate as ‘a standard bank holiday’.

‘Obviously individual businesses will need to make the decisions about what’s right for them and discuss with their employees but there is obviously no one-size-fits-all approach.’

A number of pub groups have said they will have venues open during the day.

Pub group Stonegate said it will open on Monday and plans to show the Queen’s funeral on screens.

Premier Inn owner Whitbread also said it will keep its hotels and restaurants open as usual.

JD Wetherspoon said central London, railway station, and airport pubs will open from 8 am on Monday, while the majority of its pubs will only open from about 1 pm after the funeral takes place.

On the roads, the A4 and A30 in West London towards Windsor have begun to shut, with full closures in both directions after 10 am, which are not likely to be lifted until the evening.

Multiple closures on local roads along the A4 will also be in place. People looking to drive around central, West, and South West London were advised to check before they travel, allow extra time, and expect long delays.

A large police presence was in place this morning near Chelsea Hospital, where VIPs and world leaders will take buses to Westminster Abbey for the funeral service later.

Large concrete blocks were put in place overnight across many of the roads closest to the hospital grounds, and an outer cordon was set up by police at 6am blocking off all roads up to 600 yards away.

More than 20 police officers formed one cordon halfway down Lower Sloane Street near the Rose & Crown pub at the junction with Turks Row.

Two rows of bollards were stretched across the road, along with a line of portable anti-terror barricades designed to be capable of stopping a bomb-laden truck.

Around 150 yards beyond the barricade, three trucks used for transporting bollards and security fencing were left parked across the road with orange lights flashing in an apparent bid to form another line of defence.

Local residents including early morning dog walkers had to show identification proving where they lived before being allowed through the cordon.

At around 7.30 am, two luxury Mercedes cars, believed to be official diplomatic vehicles from Sudan were allowed through the cordon after brief security checks.

Meanwhile, the M25 – usually packed on a Monday morning – was eerily quiet with barely any vehicles, while conversely at Staines-upon-Thames, which has a through rail service to Windsor – where the Queen will ultimately be laid to rest – the car park was full by 7am with marshals on hand to guide people to trains.

Bus routes will also be severely affected today with many routes diverted or stopping short of their destinations. Between one and two million people are expected to visit the capital for the funeral which begins at 11 am.