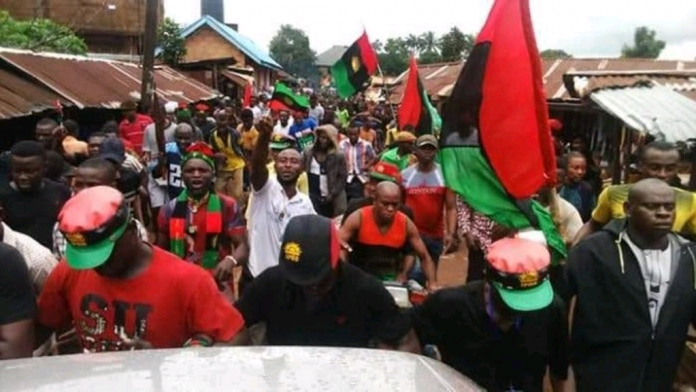 The Ohanaeze Ndigbo Worldwide, Youth wing, has urged the leadership of the Indigenous People of Biafra, to redeem itself from the reports of the attacks in Igboland by disbanding the Eastern Security Network, an armed group of the IPOB.

The acting National Leader of the Ohanaeze Youth wing, Jones Onwuasonya, made this call in Owerri on Friday, regarding the level of violence recorded since the formation of the group.

He said despite the denial by IPOB, of not being involved in the killings that “The situation leaves no doubt that the leadership of the IPOB has either lost control of the situation or some fifth columnists have hijacked the initiative and are now hiding under its the Biafran agitation to wreak havoc across the Southeast.”

To start to address the issue, the Ohanaeze called on IPOB to order their genuine members to be recruited to the official security outfit of the South East, the Ebubeagu.

Ohanaeze said, “Going by ongoing security breaches and undeniable cases of terrorist acts in the Southeast, it has become unavoidable to make the following observations and demands;

“Even though the perpetrators of these terrorist acts on Southeast soil have variously and unabashedly made it clear that they are advancing the ideologies and programs, which were initially championed by the Indigenous People of Biafra, the leadership of IPOB has vehemently denied authorizing any of the recent killings, arsons, destructions, economic sabotage and glaring terrorist activities being perpetrated across the Southeast.

“This situation leaves no doubt that the leadership of the IPOB has either lost control of the situation or some fifth columnists have hijacked the initiative and are now hiding under its the Biafran agitation to wreak havoc across the Southeast. It, therefore, becomes pertinent to invite the IPOB leadership to take steps towards quickly redeeming herself.

“By disbanding the Eastern Security Network (ESN), as it remains an illegal militant and armed group. Encourage all members and volunteers who are genuinely interested in the security and safety of the Southeast to make themselves available to be recruited into the official Southeast Security Network, the Ebubeagu.

“It is disheartening that more than five months since the idea was first mooted by Southeast governors, it is only in Ebonyi State that one could confirm the presence of Ebubeagu, the other four Southeast governors have either reneged from the agreement to set up this regional security outfit or are reluctant to release the funds and logistics necessary for the effective takeoff of the outfit.

“Let me, therefore, advise the governors that steps should be taken immediately to empower, recruit and equip personnel for Ebubeagu, as the continued delay in getting the outfit running is emboldening criminals to continue to wreak havoc in the region,” Ohanaeze said.