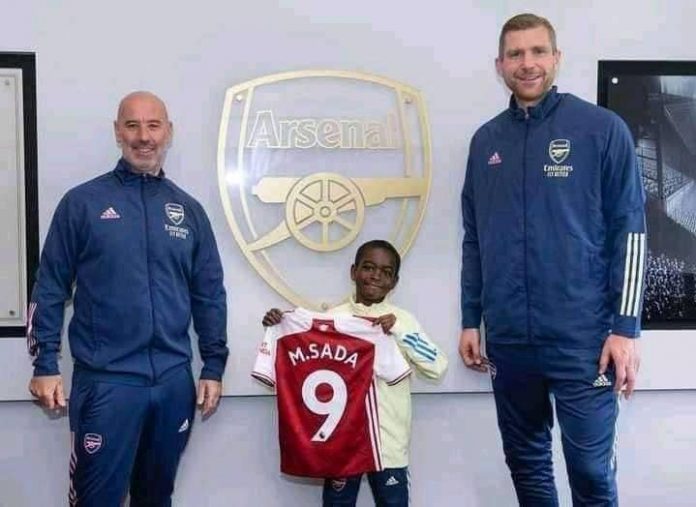 Pictures of the nine-year-old with Arsenal document trended online, with many Nigerians excited about the move.

Sada, who was kitted in an Arsenal jersey, was with two women said to be his parents in the picture.

An Information Officer at Kaduna State Department of Public Affairs, Yunus Abdallah, in a Facebook post said the nine-year-old is an indigene of Zaria, Kaduna State.

“Arsenal FC have signed a nine-year-old Nigerian. Munnir Muhammed Sada an indigene of Zaria Local Government of Kaduna State is expected to be playing for the youth soccer team of Arsenal FC,” he posted.

Sada was said to have always dreamt of being a football legend like Lionel Messi.

However, no official statement has been issued by Arsenal on the Nigerian resumption to its academy.

Akwa Nta: You will succeed son, cheers to a brighter future ahead of you!

Felix Olabode: Congratulations little boy, I pray that God almighty will grant you the strength to focus and become an ambassador to our great country.

Tiku Desire: The future of Nigerian football is in safe hands.

Accurate Offishall: Super Eagles should keep their eyes on him before England will claim him to play for England national team.

Another Nigerian youngster in Arsenal

In August 2020, Arsenal also confirmed the signing of the then 19-year-old Nigerian-born midfielder Tim Akinola.

Akinola joined Arsenal on a free transfer after his leaving Huddersfield Town at the end of last season.

“Young midfielder Tim Akinola has joined us after leaving Huddersfield Town at the end of last season.

“The 19-year-old, who impressed in Huddersfield’s youth set-up, has met up with his new team-mates and is already training with our under-23s and academy players ahead of the new season.

“Before joining Huddersfield Town in June 2019, Tim was at Lincoln City, where his progress was rewarded by breaking into the first-team squad in the EFL Trophy. During his time with Lincoln City, Tim also had a spell on loan with non-league side Lincoln United in January 2019.

“Predominantly a central midfielder, Tim, who started his youth career at League Two side Mansfield Town, is eligible to represent both Nigeria and England,” the statement read.