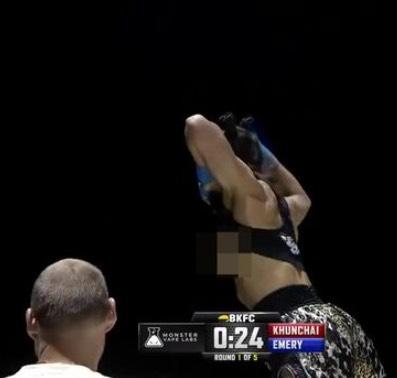 After achieving a knockout in her Bare Knuckle Fighting Championship debut, bare-knuckle boxer Tai Emery showed off her breasts.
The 35-year-old signed a contract with BKFC last year, but she has yet to make an appearance for the company.
She competed against Rung-Arun Khunchai in Thailand on Saturday, September 3, and won.
She leaped atop the rope to show off her accomplishment to the spectators.
“Welcome to bare-knuckle combat, Tai Emery,” the commentator added.
Emery launched a vicious uppercut and a quick right hook in the opening seconds of the first round. Instantaneously, her opponent was defeated.
“Interesting celebration right there, haven’t seen that one before,” the co-commentator continued.
See the video down below.
https://twitter.com/bareknucklefc/status/1566046670076387331?ref_src=twsrc%5Etfw%7Ctwcamp%5Etweetembed%7Ctwterm%5E1566046670076387331%7Ctwgr%5Ef1d9676759591906ea415026f583db4caf7bef00%7Ctwcon%5Es1_c10&ref_url=https%3A%2F%2Fwww.lindaikejisblog.com%2F2022%2F9%2Ffemale-boxer-flashes-boobs-to-the-crowd-after-brutal-ko-win-video.html