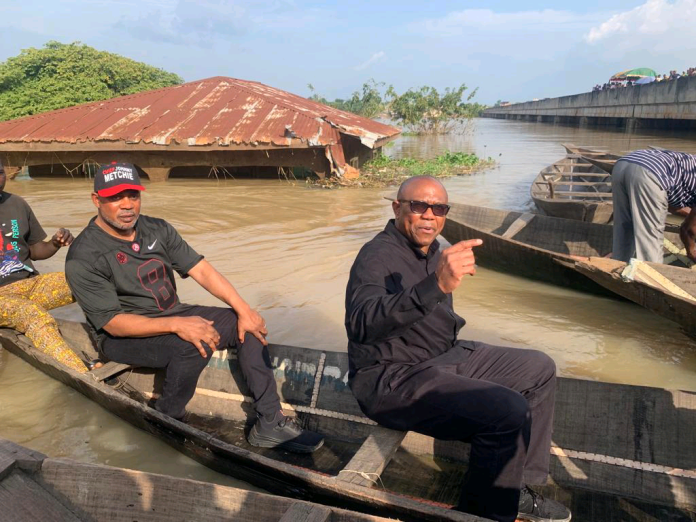 The President General (PG) of Umueri Community in Anambra State, Johnny Chukwudi Metchie, has tasked world leaders to fulfil their obligations and pledges on climate and environment to save humanity from further devastations caused by natural disasters like flood, erosion and desertification, among many others.

Metchie made the call on Saturday in Umueri when he received the presidential candidate of the Labour Party (LP), Mr. Peter Obi who paid a visit to the victims of the flood at the Umueri Unity Hall where the Internally Displaced Persons (IDPs) are camped.

Obi who arrived in Umueri in the company of some LP chieftains, took a boat ride with Chief Metchie to see things for himself in some parts of the affected communities.

While responding, Chief Metchie who is also the African Director of the International Association of World Peace Advocates, thanked Mr. Peter Obi for the visit, saying the presidential candidate came at the right time when the IDPs needed both moral and material support from leaders and other well-meaning citizens and organizations.

Metchie called on the Federal Government to rise to the challenges posed by the release of water from Dams by the Cameroonian authorities into Nigerian territorial waters, which he said was one of the major causes of massive flooding in parts of Nigeria every year.

He stated that Nigeria cannot continue to keep quiet and do nothing as thousands of citizens of the country are killed every year while properties worth billions of Naira are destroyed by flooding caused by the release of water from Cameroun.

“I want to thank the Labour Party presidential candidate, Mr. Peter Obi who is an illustrious son of Anambra State for coming to give support to our people who are victims of this year’s flooding.

“I also want to use this opportunity to call on world leaders, presidents, other heads of government, international agencies like the United Nations, the World Health Organisation and others, to fulfil their obligations on climate change. This is because humanity is on the brink of total destruction if we continue our hostility to the environment which is the reason flooding and other natural disasters are on the increase.

“In the case of Nigeria, I call on the President, the National Assembly, Governors and other leaders to convene a summit on how to tackle the challenge posed by Cameroun which every year releases water from Dams into Nigeria’s territory. Nigeria must not continue to keep quiet and do nothing over this external aggression from our neighbouring country.

“As part of countermeasures, Nigeria should construct Dams within the communities bordering Cameroun like Adamawa, Taraba, Akwa Ibom, Cross River and others, to channel the water from Cameroun Dams to other areas and save Nigeria from the perennial devastation.”