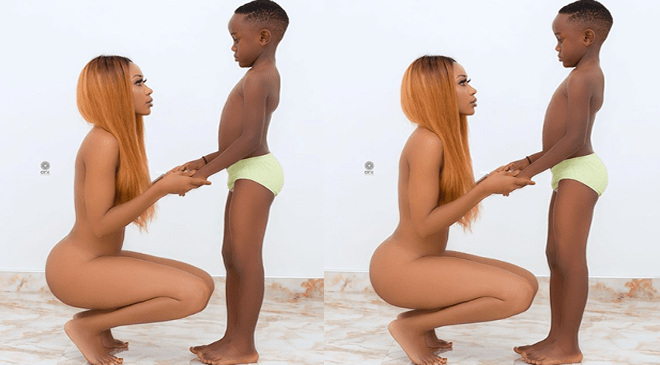 She is in court following the publication of her nude photos with her son on his 7th birthday.

According to the prosecution, on 30th June 2020, Rosemond celebrated her son’s seventh birthday by taking nude pictures together with her son who was also half-naked.

She posted the pictures on her Instagram page, which went viral on social media and attracted massive criticisms.

The pictures attracted comments, with many stating the behaviour of the accused person was likely to detract from the dignity of her son among others.

The caption on the picture among other things reads: “I am naked in front of you because this is how naked I was giving birth to you, so in case you find me lying somewhere don’t pass by but see me as your mom who brought you to life.”

The social media influencer has reportedly been convicted on her own plea by the Accra Circuit Court.

Poloo repeatedly changed her plea from not guilty to guilty to the three charges leveled against her namely: publication of obscene materials, engaging in domestic violence conduct that in any way undermines a person’s privacy and integrity.

And engaging in domestic violence namely conduct that in any way detracts or is likely to detract from another person’s dignity and worth as a human being.

While waiting for the sentence to be passed, Poloo will have to undergo a test as required by law to ensure she is not pregnant.

The actress will appear in court on Friday, 16th April with the result of the test for the sentence to be passed.

The mother of one is likely to be handed jail time, community service or fine based on the presiding judge’s discretion.