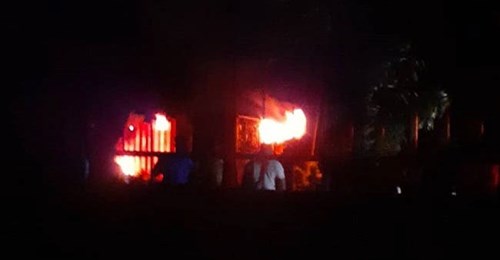 Some yet-to-be-identified gunmen have burnt down the office of the Independent National Electoral Commission (INEC) at the Essien Udim Local Government Area headquarters in Afaha Ikot Ebak, Akwa Ibom state.

Several armed hoodlums on motorcycles were said to have breached the dusk-to-dawn curfew imposed on Essien Udim and the adjoining Local Government Areas of Ikot Ekpene and Obot Akara, to launch the mayhem early Sunday morning at about 3:00 am.

Besides, the hoodlums, it was gathered, launched another attack on herdsmen leading their cattle on grazing and killed no fewer than 12 cattle, forcing the herdsmen to flee and alerted the security.

Confirming the incidents, the Director in charge of Public Affairs at Akwa Ibom state headquarters of INEC, Mr Don Etukudoh, said he was yet to establish the motive of the arsonists who attacked the Essien Udim office.

“Yes, I can confirm it you, our office at Essien Udim has been burnt down, we are yet to get details”, he said, assuring that he would be in a better position to give details of the development when properly briefed.

In the same vein, the chairman of Essien Udim Local Government, Mr Anthony Luke, described the incident as unfortunate, giving the fact the Local Government has in the recent times become an epicentre of cults war with security agencies including the Police, Customs and Army as well as government institutions as objects of attack.

“Yes, it is true that the INEC office in my Local Government has been razed down by hoodlums. I don’t know who they are, what they want and the motive behind this violence. It is only the security agencies who have been on top of the situation that will be able to unravel the reasons behind these series of attacks. The hoodlums also attacked herdsmen. I think those herdsmen were taking their cows near were they launching the attack,” he said.

The Police Public Relations Officer (PPRO), Mr. Odiko Macdon, a Police Superintendent (SP), could not pick his calls, but his colleague at the state headquarters, Ikot Akpanabia, said he could be either in the Church or in the company of the Commissioner of Police (CP), Mr Amiengheme Andrew, to inspect the scene of the incident.

Facebook
Twitter
WhatsApp
Linkedin
Telegram
Previous article‘It is a crime to use a minor as a trap to gather evidence’ – Yomi Fabiyi
Next articleInsecurity: Buhari warns Nigeria media