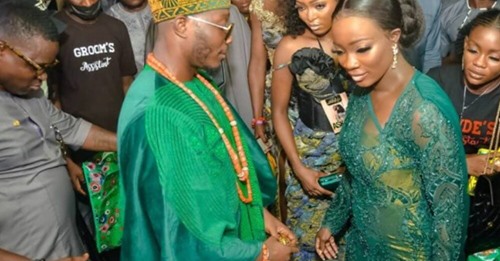 Iyabo Ojo was a rare guest and cynosure of all eyes over the weekend at Pasuma’s daughter’s wedding.

The single mother of two was all dressed up in the Aso Ebi, that not even the father of the bride, Pasuma Alabi could resist her.

For Nollywood actress, Iyabo Ojo, life’s moment must be captured on camera.

This, she did as she stole the attention of Fuji musician, Pasuma Alabi, who is the bride;s father,

Seated next to actress Kemi Koede, Iyabo Ojo made sure she playfully gained the attention of Pasuma.

The single father, Alabi on Thursday gave out his daughter Barakat in marriage to Nurudeen Olajuwon.