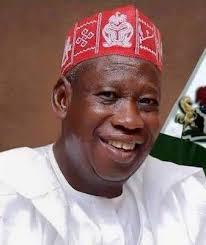 Seventy-one-year-old Kano State Governor Abdullahi Ganduje says he will remain politically active after the  expiration of his second term in 2023.

The Kano State governor has spent a total of 43 years in politics, having started in 1978.

Although Ganduje was not categorical on whether or not he would contest another election, he said his eyes would be wide open for the good of the country.

The governor stated this while fielding questions from reporters on the Democracy Day celebrations in Kano on Monday.

Asked if he would toe the path of his Katsina State counterpart, Aminu Bello Masari, who recently said he would quit politics in 2023, Ganduje replied: “Maybe he (Masari) is tired. I am not.

“I am not tired anyway; neither will I resign nor retire from politics. You know I have been in politics since 1978. In 2023, my eyes will still be open,”.

On the  jostle  to succeed him by some people, including those in his cabinet, the governor declared: “Our  party (All Progressives Congress) delegates will choose my successor when the time comes,”

”You asked of qualities; if I tell you the qualities I want from my successor, you will be able to make a computation, matching the qualities of the aspirants,  then you will say that is the anointed one. Delegates will do that.”

Ganduje also said   delegates would pick the presidential candidate for the ruling party.

On completion of projects before May 29, 2023, Ganduje said: “We inherited many capital projects. Some are being completed and some are still ongoing. We are not neglecting any.

Facebook
Twitter
WhatsApp
Linkedin
Telegram
Previous articleNothing Is Stopping Us From Moving On After The Death Of TB Joshua– SCOAN
Next articleTwitter ban: Nigeria loses N24.72billion in ten days