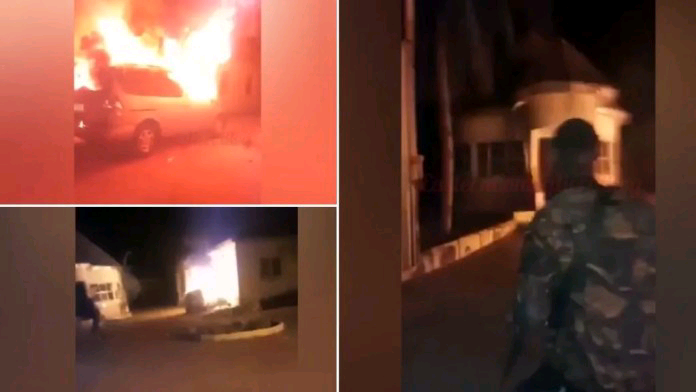 At least one person has been killed as suspected gunmen perpetrating mindless killings in the South-East region attacked the headquarters of Ebubeagu security outfit at Uli, Ihiala Local Government Area (LGA) of Anambra State.

According to reports, the gunmen stormed the facility in the wee hours of Wednesday, January 4, 2023, and were able to gain access into it, setting fire to the building and some vehicles. The criminals also killed at least one vigilante member.

A video of the incident has been circulating on various WhatsApp groups and other social media platforms.

In the clip, seen by this newspaper, one of the assailants who filmed the attack said, “we don enter there. We are burning the Ebubeagu building”.

“Our operatives on the scene recovered unexploded explosives and other incriminating items. But unfortunately, three local vigilante operatives were shot when they engage the assailants during the attack.

“While the other two are currently responding to treatment, the other was confirmed dead by the doctor.

“Operations are still ongoing and further details shall be communicated,” Tochukwu said.

Ebubeagu was set up in 2021 by governors of the five states in the South-east to help in the fight against insecurity in the region which has witnessed deadly attacks linked to the outlawed Indigenous Peoples of Biafra (IPOB).

But the security outfit has been accused of extrajudicial killings like in the tragic incident in July 2022 where some Imo youth returning from a wedding ceremony were allegedly shot dead at a close range.