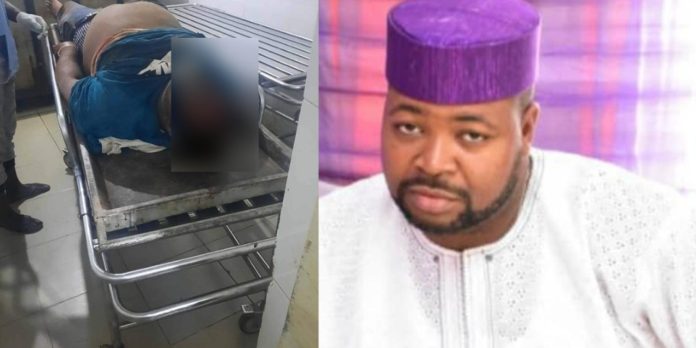 It was gathered that after killing Akinyemi, aged 47, the attackers abducted one of his friends before leaving.

SaharaReporters reports that the gunmen also shot the manager, Emmanuel Olushila Ojo, who is currently receiving treatment at the general hospital in Ilorin after being critically injured.

The friend of the hotel owner who was abducted by the kidnappers was simply identified as Ori.

READ ALSO: Why I stoned my two kids to death – 25-year-old father

A statement released by the Kwara Police Public Relations, Okasanmi Ajayi on Monday confirmed the incident.

The statement reads, “A group of gunmen invaded a hotel named 16 HOUR hotel, Alomilaya area of Ganmo, Ilorin, shot indiscriminately, killing the owner of the hotel, one Kayode Akinyemi ‘m’ aged 47years, while his manager named Emmanuel Olushila Ojo ‘m’ was seriously injured and presently receiving treatment at the general hospital Ilorin. One of the friends of the owner of the hotel, one Ori ‘m’ who was with him on the day of the incident was abducted.

“The Command’s Tactical teams in conjunction with vigilante and hunters have since been mobilized to the scene to comb the surrounding bushes for possible rescue of the victim and arrest of the hoodlums, while the corpse of the victim has been deposited in the general hospital mortuary for autopsy.

“Therefore, the Kwara State Commissioner of Police has declared a complete lockdown of the area and a result-oriented manhunt for the criminals responsible for the heinous act, adding that enough was enough for the criminals and that strict security measures have already been put in place to stifle the activities of the criminal elements in the state.”