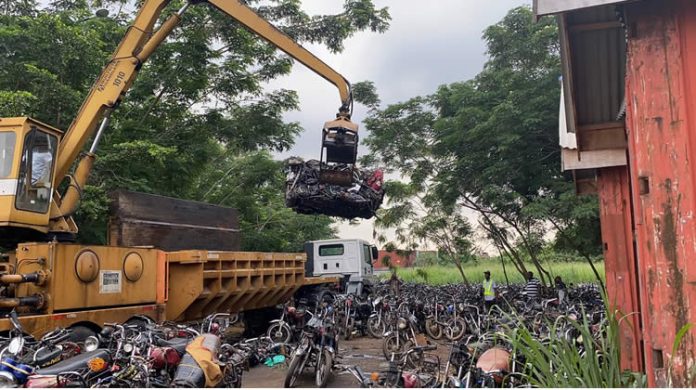 The Lagos State government has insisted that there is no going back on its decision to rid six local government areas and nine local council development areas of commercial motorcycles, popularly known as okada.
In a bid to actualise its objective, the government says it is already crunching commercial motorcycles numbering 2,228.
These motorcycles impounded by the Lagos State Task Force are being crushed in an undisclosed location in the state, said Mr. Gboyega Akosile who is the Chief Press Secretary to the state governor, Babajide Sanwo-Olu.
According to Akosile who shared a video of the crushing of the impounded motorcycles via Twitter on Friday, Lagos deserves better than okada.
He stated that the enforcement exercise would continue until the affected local government areas and local council development areas were rid of commercial motorcycles.
The affected local government areas include Ikeja, Surulere, Eti-Osa, Lagos Mainland, Lagos Island, and Apapa.
The government had announced a total ban on the operation of commercial motorcycles in the areas effective from June 1, following concerns raised over the security and safety of the residents.
It stated that compliance was significant and assured residents that it would not leave them to their own devices.
The government had vowed to work towards the achievement of an efficient intermodal transportation system – water, rail, and road – that would be the ‘pride of all’.
It announced the rolled out of alternatives, including many small buses, taxi cabs under the LAGRIDE scheme, and the deployment of more ferries on waterways, to cushion the likely effects of the ban in the affected areas.