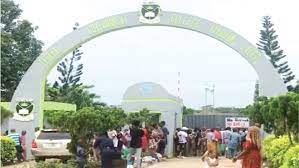 The Principal of Federal Government College (FGC), Ijanikin, Tofunmi Akamo, has confirmed the allegations of sexual misconduct by some of her students.
She however explained that the student that was found to be pregnant was not of the girls caught in the hotel. Rather, she said the girl got pregnant at her parents’ home when the school was shut during the COVID-19 pandemic.
Her words: “It was towards the end of November when, on a Monday, my attention was called to the fact that on Sunday evening, when they had a bed check, some girls were not in the hostels. And then the morning of Monday, they called their parents to find out if they were at home. And the parents said they were not at home. We then began investigations immediately.
“So, on Monday when we were trying to know what had happened since they were not at the hostel that night, one of their friends told us that they were in a hotel. They scaled the fence on the night of Sunday to go to a hotel and we were shocked to find them there. There were five who were caught in the hotel but during interrogation, we found out that there was another girl who also went with them on that Sunday but came back to the school on Monday.”
She however explained that the disciplinary committee of the school met over the matter and suspended the students and reported the same to their parents.

“During the COVID-19 pandemic, when the final year students were asked to resume preparing for the West African Senior School Certificate Examination, WASSCE, one female student had reported being pregnant from home. When we noticed this, we subjected her to a medical test and as soon as we confirmed this we sent her back to her parents. She was already five-month pregnant then.
“I have about 3,500 students and I understand that the background and upbringing are different for each and every one of them. So, those we found to be immoral are taken out for guidance because we needed to act as their parents because we also have our children and we could not be everywhere with them.”
The principal also blamed the parents for indulging the children, saying after “spoiling” them they would send them to boarding schools for the teachers to manage.
She said a parent whose daughter was found to be unruly was invited to the school but declined to show up.
“In fact, we volunteered to take the child to the parent at home and this man said he was not available. But when we got to his house, he was home enjoying himself. It is the height of irresponsibility,” she said.
She also lamented that despite the fact that the use of phones was banned in the school, parents have continued to smuggle phones into the school for the children and that these phones are kept “even on the roofs of the hostels.”
Meanwhile, the Government College, Lagos, Old Students Association, FEGOCLOSA, has alleged that parents of some young learners penalised for indulging in illicit sexual acts are threatening the management of the school for taking punitive actions against the students.

In a statement by the Global President of the association, Toun Aderele, in Lagos, she said,
“A couple of weeks ago just before the FEDCOL GAMES which was held in Lagos, there was a roll call in the school, a regular random exercise carried out by the school management as one of the measures to keep tabs on the students and curb their excesses. It was during this exercise that the authorities realized that some students were not in their dormitories.
“The parents of the said students were immediately called to find out if their children were at home. None of the missing children were in their homes. With some stroke of luck and after a lot of pressure from the authorities, one of the students decided to open up as to where these students were.
“It was with this information that the school authorities along with the parents of these students and officers of the Ijanikin Police Station found them in a hotel within the community. The students were picked up and taken to the Ijanikin Police Station for further interrogation. It was discovered that the ring leader is the son of a popular monarch. As recommended by the set rules and guidelines of the Federal Ministry of Education, the students were immediately suspended indefinitely. The rest is history.
“The SBMC Schools Based Management Committee is a body of all the stakeholders. SBMC Chairman, the Principal and all the Vice Principals, the representative of The Education Minister, Oba of Ijanikin, The Ijanikin Divisional Police Officer, The Local Government rep in charge of Education, the PTA Chairman and the Global President of the Old Students Association,” Aderele said.