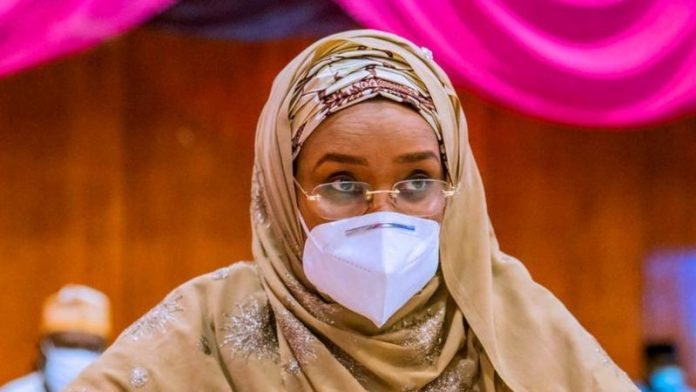 Minister of Humanitarian Affairs, Disaster Management, and Social Development, Hajiya Sadiya Farouq, on Saturday, expressed optimism that her husband, Air Marshal Sadique Abubakar (retd.), will be voted the governor of Bauchi State in the 2023 election.

The minister made the bold declaration while serenading Abubakar at an event held by Bauchi indigenes and friends of the former Air Force combatant at the International Conference Centre in Abuja.

Midway through her welcome speech, an excited Farouq had described him as the best brother, husband, and governor anybody can ever pray to have.

She said, “Sadique is the best brother, father, and husband. I have no doubt that he will be the next and best governor of Bauchi State Insha Allah.”

Sadiya, the youngest minister in the current administration, was a national treasurer of the defunct Congress for Progressive Change before the amalgamation of parties that metamorphosed into the All Progressives Congress.

The development is coming barely three months after a socio-political group in Bauchi under the aegis of ‘Coalition of APC Groups’ accused her of inducing delegates to vote for Abubakar ahead of the last APC governorship primary in the state.

The leader of the coalition, Yusuf Ajiya, made the allegation in a statement issued to newsmen in Bauchi on May 23.

Ajiya alleged that rather than concentrate on registering names of ‘the right beneficiaries’ who have been targeted to benefit from the survival funds, Farouq took details of party members who were due to participate in the primary as beneficiaries of the funds.

The minister has since dismissed the allegation as a mischievous attempt to disparage her and put her office in a bad light.

The retired air vice marshal was equally in the news less than two weeks ago when a civil society organisation, Accountability, and Democratic Project, called on the Independent National Electoral Commission to disqualify him from the race for Bauchi governorship for allegedly ‘withholding information.’

The allegation, which was disclosed in a letter addressed to Mahmud Yakubu, INEC chairman, and dated August 15, alleged that the APC governorship candidate submitted incomplete information to the commission in disregard of the Electoral Act 2022.

But Abubakar dismissed the speculation again at the event, saying he was not bothered and won’t be distracted in his desire to add value to the lives of his people.

He said, “As you know, 2022 is a year of intense political activities, our credentials have already made huge impacts on some politicians, leading them to embark on a desperate move to counter whatever we are set to achieve in the interest of our people.

“We are not bothered because we remain focused. Our intentions are noble and we will not be distracted in our desires to add values to our society.”

Reacting to the euphoria and accolades he received, the retired air vice marshal appreciated his wife, friends, and former bosses who trooped out for the occasion.

This is even as he swore to reopen schools and return the 1.4m out-of-school children in Bauchi State back to the fountains of knowledge.

He said, “We must collectively work to reopen the gates of schools to students that have been denied the opportunity to attend one. In Bauchi State alone, we have 1.4m, out-of-school children.

“Similarly, we have 1, 549 women who died for every 100,000 births in Bauchi. These statistics are very frightening. But I will continue to put in my best for my people and the State after spending over 42 years of service in the Air Force.

“It is a call I cannot refuse in the light of the present state of affairs in the state, in particular, and the state in general.

“My family and I are deeply touched by the interest you have shown in my modest achievements as Chief of Air Staff of the Nigerian Air Force and also as an ambassador of the Republic of Chad.”