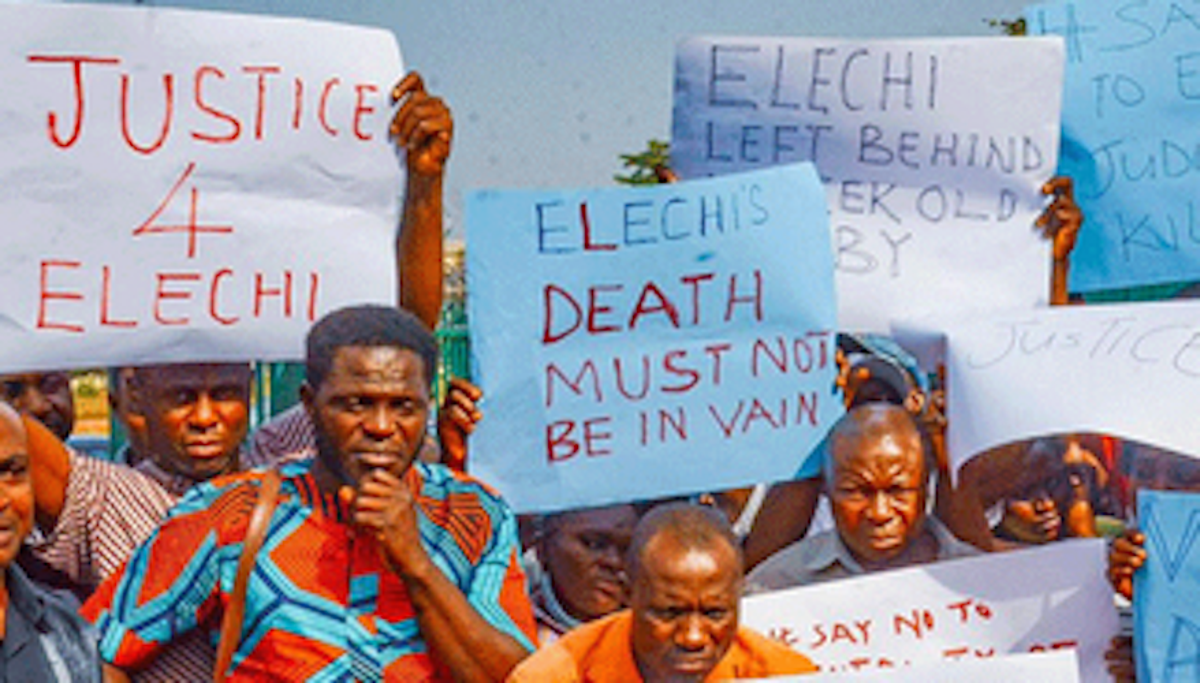 Newspapers vendors in the Federal Capital Territory, Abuja on Friday protested the killing of their colleague, Ifeanyi Elechi, who was shot dead on Thursday by a security aide to the Speaker, House of Representatives, Femi Gbajabiamila.

The vendors who were carrying placards, demanded justice, insisting that the errant operative who is believed to be a Department of State Services operative must be brought to book.

Gbajabiamila has issued a statement expressing regrets over the tragedy and announcing the suspension of the officer involved.

He said he was not aware of the incident until much later, adding that he was  distraught  by the killing.

The shooting incident happened when Elechi and other street vendors selling on the Shehu Shagari Way, Three Arms Zone, flocked around the convoy of the speaker who was said to be in the habit of giving out money anytime he passed them.

The victim was inexplicably shot in the head and died at the National Hospital.

Chairman of the Newspapers Vendors Association in FCT, Etim Eteng, said the association would not allow the matter to be “swept under the carpet.”

According to him, the vendor’s death was not a result of accidental gunfire or stray bullets, noting that he was shot point-blank by the unidentified security officer, stressing that there were witnesses at the scene.

Eteng stated, “We are gathered here today to demand justice for Elechi who was killed extra-judicially. Extrajudicial killing means the killing of an individual by a security operative without judicial proceedings and this is what has happened. The vendors association through their legal adviser are demanding justice.

“The overzealous security operative who killed Elechi must be brought to book; he must face the wrath of the law. We know that over time, judicial killings have been swept under the carpet but this time, the death of this innocent man who left his wife and new-born baby to look for his daily bread and was killed by an aide to the Speaker of the House of Reps must be probed and the killer brought to book.

“It was not an accidental discharge; he was shot in the head. It is not stray bullets, there are eyewitnesses. The spirit of Elechi would not rest until justice is done.”

Meanwhile, the FCT Commissioner of Police, Bala Ciroma, has ordered an investigation into the incident.

The command also refuted allegations that the killer was a police officer.

A statement by the command spokesperson, ASP Mariam Yusuf titled, ‘Shooting of newspapers vendor not by the police,’ commiserated with the family of the victim.

It read, “The FCT Police Command wishes to unequivocally refute the allegation making the round sections of the media that a police officer attached to the convoy of the Speaker of the House of Representatives shot at a newspaper vendor within the Three Arms Zone on Thursday 19th November 2020.

“Contrary to the misleading information, a preliminary investigation into the unfortunate incident reveals that the security aide who shot at the vendor is not a member of the Nigeria Police Force.