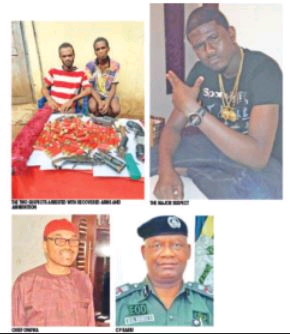 Two suspected kidnappers and alleged members of the Indigenous People of Biafra, Jidechi Akakem and Chibuike Ibeukwu have been nabbed by police operatives attached to the Imo State Police Command, according to The Sun.

The two suspected kidnappers arrested by the Anti-Kidnapping Squad of the Imo State Police Command claimed they were hired by one Emmanuel Anyanwu, a man described by the police as a notorious kidnapper and suspected killer. The man is also known as ‘Walking Skeleton,’ Sun reports.

According to Akakem and Ibeukwu, ‘Walking Skeleton’ gave them three locally-made pistols and 14 rounds of live cartridges and promised to give them N100, 000. Their assignment was to kill a businessman and managing director, Octagon Guard Security Outfit, 62-year-old Vitalis Onuwa.

Anyanwu, it was gathered, set up an illegal task force at Emekeukwu Village, which prompted Onuwa to sack him. He thereafter recruited some youths, gave them illegal arms and ammunition and involved them in kidnapping and killing of innocent souls.

Anyanwu, who is at large, was said to have employed 26-year-old Akakem and 18-year-old Ibeukwu to kill Onuwa in his house on July 6, 2021.

The Imo State Commissioner of Police, Hussein Rabiu, said that Emmanuel Anyanwu, (Walking Skeleton) was a notorious kidnapper and killer.

He said the man was a cultist and member of Viking Confraternity.

Rabiu described Anyanwu as a wanted killer who has terrorised the Ezeogba Emekeukwue Community in the Owerri North Local Government Area of Imo State for years.

The state police boss said it was intelligence gathering that prompted the Anti-Kidnapping Commander, Supol Oladimeji Oyeyeyiwa and his operatives to swing into action and stormed the notorious gang’s hideout on July 7, 2021.

He said the police operatives arrested Jidechi and Chibuike at the hideout in Emekeukwue, Owerri North Local Government Area of Imo State.

In an interview, one of the suspects, Jidechi said he is from Umuchoke Orji in Owerri North Local Government, Area of Imo State.

A graduate of law, he also explained why he became a kidnapper after his law studies.

He said, “It was Emmanuel Anyanwu who recruited me to be a member of IPOB and a member of Viking Confraternity. I am a bodyguard to Emmanuel Anyanwu, the Walking Skeleton. We have terrorised people in our community. My leader, Emmanuel Anyanwu told me that I should go and kill Chief Vitalis Onuwa and promised to give us N100,000. He gave us N30,000 and gave us three locally made pistols and 14 rounds of cartridges to go after him. He said he would pay the remaining N70, 000 once the job was accomplished.

“He wanted us to kill Chief Vitalis Onuwa so that he could become the Chairman of the task force in the community. He gave us three days to carry out the execution. We didn’t go, nor did we attack Chief Vitalis Onuwa. I asked him why we should kill an innocent person.

“I told him I couldn’t do such an evil act. He promised us that if we killed Chief Vitalis Onuwa, he would pay us the remaining balance of N70,000. But suddenly on July 7, 2021, the Anti-kidnapping operatives came and arrested us,” he said.

Meanwhile, the command is on the heels of one Emmanuel Anyanwu who is claimed to be a kingpin of kidnappers.