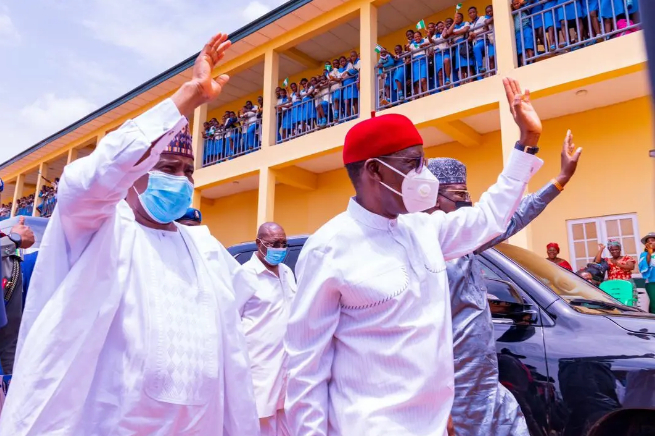 Matawalle disclosed this in his remarks while inaugurating Igumbor-Otiku Secondary School, Boji-Boji Agbor and 13.9km internal roads and drainages in Okpanam within Asaba capital territory.

He described Okowa as a leader who “builds bridges across all divides and focuses on developing his people through life-changing projects”.

The Zamfara Governor, who was in company of his Sokoto State counterpart, Rt. Hon. Aminu Tambuwal, stated that Okowa was a formidable force, particularly for his purposeful leadership and urged him not to relent in bringing the dividends of democracy to Deltans.

“Your governor has demonstrated remarkable strength and capacity to deliver on live-changing projects for the people of Delta.

“He has invested greatly in education with enormous social and economic opportunities for the benefiting communities and it is indeed very commendable.

“This clearly demonstrates the fact that if we educate our children, particularly the women, we educate the world,” he said.

Matawalle said that he was impressed with what he had seen in the state and urged Deltans to appreciate the governor for his uncommon transformation of the state.

“The uncommon transformation I have witnessed today is unbelievable. This is a reality and if all governors can copy what Okowa is doing, Nigeria will be a good place for every citizen to stay back at home.

“On behalf of the government and people of Zamfara State, I congratulate you for what you are doing for the people of Delta.

“We pray for more wisdom to do more for your people in the remaining two years of your administration,” he stated.

In his remarks, Governor Okowa said that he was glad to have provided the children with a beautiful place to learn after the handover of schools to missionaries some years ago.

He assured Agbor community and its monarch of his continued support for the growth and development of the area.

“I am glad that we have been able to provide this beautiful environment for our children to learn.

“I congratulate the Commissioner for Basic and Secondary Education for what he is doing in the ministry.

“Ceding schools back to missionaries made it so difficult for parents who couldn’t afford private school fees and it became very imperative for the government to build new schools.

He stated that Okpanam internal roads were part of the capital territory, noting that the importance of road network to the economic development of communities couldn’t be over-emphasised.

Earlier, the Commissioner for Basic and Secondary Education, Chief Patrick Ukah, had said that the school was founded in 2016 after inheriting the old facility at Igumbor-Otiku Primary School, to handle the increase in population as a result of handover of schools to missionaries.

Ukah said that Governor Okowa granted approval for the establishment of the school in 2016 while construction work commenced in 2018.

“The school has been built according to specification, with two blocks of 12 classrooms each, examination hall, an administrative building and a block of four laboratories, landscaping and drainage system, perimeter fencing and a gate house.

“With a population of over 1,700 students, the school has achieved the purpose of decongesting population at Ogbemudein Secondary School, Agbor,” he said.