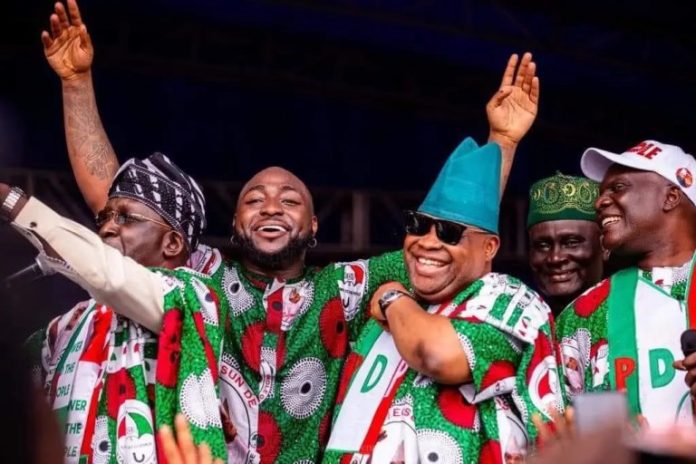 The Minister of Interior, Rauf Aregbesola, has deleted a post where he broke his silence on the outcome of the just-concluded Osun State governorship election, according to The Punch.

This was after the post had gone viral Sunday morning.

In a statement, the Media Adviser to the Minister of Interior, Sola Fasure, said the deleted post was not authorised.

The former Osun State governor, who boycotted the election, had remained silent on development in Osun State after his outburst against the presidential candidate of the All Progressives Congress and his political boss, Bola Tinubu, in February 2022.

The Independent National Electoral Commission on Sunday morning declared Ademola Adeleke the governor select of Osun State after scoring a majority of votes cast in the governorship election in the state.

The victory came for Adeleke nearly four years after failing by a small margin in his bid to govern Osun State.

On Saturday, Adeleke polled 403,371 votes to defeat his closest rival, the incumbent governor of the state, Gboyega Oyetola, who polled 375,027 votes.

Though 15 political parties participated in the election, the top contenders were Oyetola and Adeleke.

Both Oyetola and Adeleke contested for the Osun governorship seat in 2018, which Oyetola won after a rerun.

It has been reported that  Aregbesola had publicly moved against the second-term ambition of Governor Oyetola.

Instead, Aregbesola endorsed the former Secretary to the State Government, Moshood Adeoti, who later lost to Oyetola at the APC governorship primary election held on February 19, 2022.

Aregbesola reacted to the election in a now-deleted post titled, ‘Osun Le Tente’, connoting the wish of the Osun people excelled, on Sunday morning.

He posted a bible verse, Daniel 4:17, which exalts God’s power to place control in the hands of whoever He wishes.

“This matter is by the decree of the watchers, and the demand by the word of the holy ones: to the intent that the living may know that the most High ruleth in the kingdom of men, and giveth it to whomsoever he will, and setteth up over it the basest of men.” – (Daniel 4:17),” the minister posted.

In the outburst ahead of the party’s governorship primary election in the state, Aregbesola said that enough is enough for the politics of godfatherism and enthronement by treacherous leaders who equated themselves to the status of a god.

The minister had said he trusted Tinubu, but the ex-governor of Lagos State repaid him with betrayal.

Though Aregbesola made moves to reconcile with his political boss Tinubu, the efforts yielded no result.

A few hours before the governorship election, a faction of the APC led by the minister, The Osun Progressives, released a statement noting that despite the fued, its members would remain in APC.

This was after a stalwart of the APC and one of the closest loyalists to Aregbesola and a TOP mobiliser, Kolapo Alimi, defected to the PDP.

The TOP’s position was contained in a post shared by a former commissioner in the state, Sikiru Ayedun, on Friday.

The group alleged maltreatment of its members by Governor Gboyega Oyetola’s administration.

Part of the statement issued by TOP read, “Our association, a caucus within the State of Osun All Progressives Congress (APC), was founded last year when we alarmingly saw the direction our party was going. It was like the falcon could no longer hear the falconer. We were filled with trepidation on the tempest long foretold.

“We were at this junction before, in the run-off to the 2003 General election. We feared that history might tragically repeat itself except we acted selflessly and forthrightly. Like-minded members and leaders of the party, therefore, came together to form the group.

“As a caucus within the party, we have consistently made strident efforts at peace and reconciliation within our party. For this, we have only asked for one condition, which is inclusiveness.

“The State Governor and his henchmen, most regrettably, have turned his office and our party into a zero-sum game. You are either with them or against them. They rejected any idea of inclusiveness. They rebuffed all propositions for peace and reconciliation and not even a Councillorship position was ceded to any other section of the party outside of the Ileri-Oluwa caucus.

“Any party member that is not publicly demonstrating obscene loyalty to the governor and attacking Ogbeni Aregbesola or anyone remotely or directly associated with him is branded an enemy and marked for alienation from government and party offices. Worse still, the independent-minded party members not praise singing the Governor are subject to insidious and malevolent attacks.

“The policy of exclusion in Osun APC is so deep that Ogbeni Rauf Aregbesola who is the immediate past Governor of the state and the current minister from the state was neither consulted, invited nor included in any party matter, the most recent of which is the APC’s Osun Campaign Council for this election. This posturing has riven the party.

“Nevertheless, we remain unflinching members of our party, the All Progressives Congress and stand by its ideals, irrespective of our travails or even the outcome of the election. We are long-distance runners and will not abandon the ship of our party, in calm or stormy waters.”

It was learnt that the former governor of Osun State, Rauf Aregbesola, has travelled abroad to attend a conference.

According to an aide of the minister, Aregbesola shunned the election to avoid a crisis.

It was learnt that the minister was in Lagos State on Thursday before travelling to Abuja on Friday.

“He proceeded on an official assignment on Friday,” Fasure said.

The media aide noted that Aregbesola was not invited to work for Oyetola’s second-term bid in Osun.

He also said the minister was not named in the Osun State campaign team by the All Progressives Congress.

He said, “Aregbesola is not in Oshogbo. He is on an official assignment. He was not invited and not a part of the election council. The governor did not also invite him to be part of the campaign.”