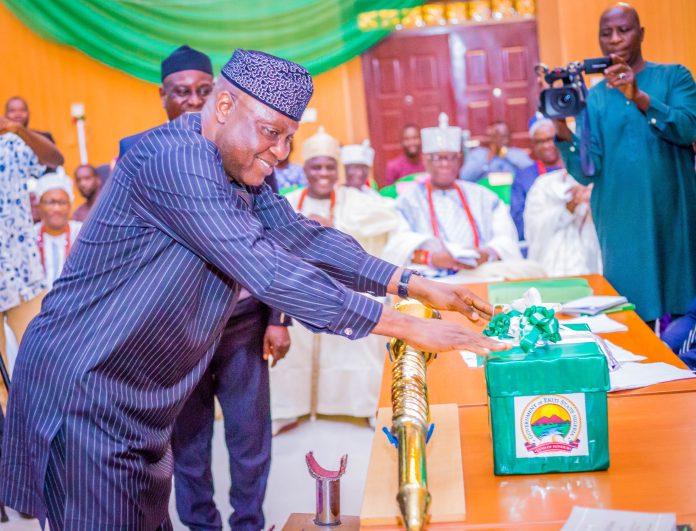 Ekiti State Governor, Mr. Biodun Oyebanji, on Thursday presented a budget estimate of N113,572,718,523.82 to the House of Assembly for the 2023 fiscal year aimed at building on a strong foundation already laid for the development of the State.
Christened “Budget of Strong Beginning,” it has a total sum of N80,362,578,854.29 as recurrent expenditure and a sum of N34,062,085,464.93 as capital expenditure.
The figure is about N13 billion higher than the last budget of N100,753,933,241.60 presented by the immediate past Governor of the state, Dr. Kayode Fayemi, in December last year, which was tagged “Budget of Legacy and Consolidation.”

Oyebanji stated that the 2023 proposed budget was designed to address the challenges posed to subnational, national, and global economies and the ripple effects of the economic downturn.
He disclosed that the budget which was largely the product of the citizen’s engagement programme he had with stakeholders from towns and villages across the three senatorial districts of the State was designed to ensure that the internally generated revenue of the State is increased to reduce the dependence of the state on federal allocation.
He added that the 2023 budget was anchored on his administration’s six pillars for Ekiti development which include Youth Development and Job Creation, Human Capital Development, Agricultural, and Rural Development, Infrastructure and Industrialization, Arts, Culture and Tourism, and Governance.
The budget presentation which was held at the chambers of the State House of Assembly Complex, Ado-Ekiti, was witnessed by the Deputy Governor, Chief (Mrs) Monisade Afuye; members of the State Executive Council, traditional rulers, heads of tertiary institutions, leaders of the ruling All Progressives Congress (APC) and party faithful.
Oyebanji assured of an increased allocation of resources to the critical areas of infrastructure such as water supply, electricity, housing, improved road network, and provision of other infrastructural facilities across the 16 local government areas of the state.
He identified some of the projects to be executed including Ado Ekiti township Roads, and the construction of Atlas-Ajebamidele-Deeper Life -Alasia – Shepherd- Omisanjana road. Ikere–Ilawe road, Itapa – Omu- Ijelu, etc roads, completion of phase II of New Iyin road and rehabilitation of Igede – Ilawe road, among others.
The Governor stressed the need by all stakeholders to improve on the state Internally Generated Revenue (IGR), with the incorporation of the Nigeria National Petroleum Company (NNPC) Limited and attendant zero remittance to the Federation Account in recent times. This he said will cushion the effect and withstand possible revenue shock.
Speaking on what the budget aims to achieve, Oyebanji said: “Our goal is to safeguard our people’s lives, livelihoods, well-being, and future. It is to create shared prosperity for all and to grow the economy, equip our people with valuable skills, create jobs, and expand the range of opportunities available for everyone.
“It is to create a conducive environment for investors to thrive in our economy, and to make Ekiti State the preferred destination to live, work, and invest. Let me assure you that the Budget I just presented represents the plan, policies, and programmes designed by our Administration to achieve the collective aspirations of the good people of this State in my first year in Office.
“While I am in a hurry to develop all sectors of our economy, I am mindful of the challenge of limited resources. However, the pact I signed with Ekiti State is four years in the first instance.
“Our administration will make concerted efforts to touch and transform every sector of the economy as we journey in my tenure as your Governor. All the lofty ideas I have conceived cannot be realized without your support.
“Having been building on the foundation laid by my predecessor, it is my honour and pleasure to present the 2023 Budget Estimate which I have christened ‘BUDGET OF STRONG BEGINNING. We are starting strong because we are not starting afresh.”
“There is no denying the fact that successive administrations have made impressive achievements in the development of our State. With all sense of humility, I acknowledge the solid foundation made by the immediate past administration in the quest to develop Ekiti State. The numerous legacy projects executed by the administration have undoubtedly, laid a solid foundation for our administration to leverage on.” He said.
The Governor assured the people of the state of his irrevocable commitment to openness, transparency, and accountability which he described as the underlying principles that would be the major factor in the formulation, preparation, and implementation of Ekiti State Budgets in line with Section 121(1) of the 1999 Constitution of the Federal Republic of Nigeria (as amended).
Oyebanji explained that he had earlier forwarded the 2023-2025 Medium Term Expenditure Framework (MTEF), which is the forerunner of the 2023 Fiscal Estimate to the Assembly noting that MTEF relies on both domestic and global economic parameters, variables, and key indicators to make a reasonable forecast for 2023-2025.
He added that the process also considered the requirements of the State Fiscal Transparency, Accountability, and Sustainability (SFAS) and the latest template from the Nigeria Governors’ Forum (NGF).
Equally, the  Governor reiterated his earlier call to investors, Development Partners, and Ekiti citizens all over Nigeria and in the Diaspora to make their home state their destination of choice for business and pleasure describing the state as very open to business, and having an enabling policy and institutional framework that will ensure prudence, transparency, and accountability in all obligations.
He also used the medium to commiserate with the Assembly members and the entire Ekiti people on the death of the Speaker, Mr. Funminiyi Afuye, whom he described as an illustrious son of the state saying “his unexpected demise is not only devastating, it is a colossal loss to Ekiti State and humanity in general.”
Oyebanji who asked for a minute’s silence in honour of the late Speaker described the deceased as a rare gem. “He was a diligent, passionate, and dependable leader of our dear State. We have lost a rare gem and a priceless treasure at a time he is most needed for his wisdom and experience. May the soul rest in peace.”
The Deputy Speaker, Rt. Hon. Hakeem Jamiu, who stood in for the deceased Speaker, commended the industry, diligence, and commitment put into the preparation of the budget estimate.
Jamiu promised that the state lawmakers would look critically into the budget estimate and ensure its passage in good time and also monitor its implementation by the executive arm and ministries, departments, and agencies.