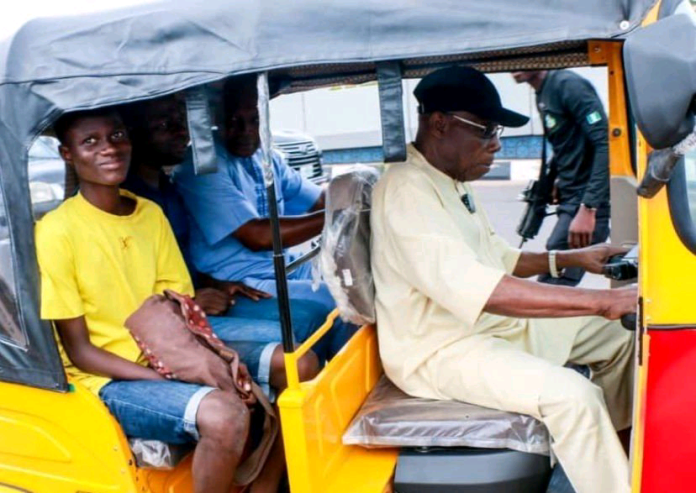 Former President Olusegun Obasanjo has disclosed why he rode a tricycle around the Kuto area of Abeokuta, Ogun State.

Obasanjo explained that he wanted to encourage youths to venture into tricycle and small-scale businesses.

He rode the tricycle from the OOPL premises through Kuto under the bridge amid surprises, greetings, and jubilation by onlookers.

Amidst cheers, the Balogun Owu stopped on the road to pick up a male passenger, after which he returned to the OOPL premises.

However, the former president, in a statement by his media aide, Kehinde Akinyemi, said he has a passion for youth empowerment.

Obasanjo said he wanted to demonstrate to Nigerians that there is nothing bad in using tricycles for commercial purposes.

According to Obasanjo, he rode and picked “a male passenger to demonstrate that riding in the tricycle is safe if used properly” and to show Nigerians to learn how to “start small and grow their craft.”

“When I recently gave out tricycles to 85 young people across the nation, I received some feedback that they were sort of inappropriate gifts and some wondered if they were the best and suitable for young people.

“I have embarked on riding the tricycle to demonstrate to people that there is nothing bad in riding it and using same for commercial purposes.

“With tricycles and other small scale businesses, youths can be self-employed and ultimately, become economically independent.

“There is nothing wrong in young people starting small. The Keke is secure and safe when handled professionally and with discipline,” he said.

He said it was wrong to classify tricycle operators as miscreants.

“It is a wrongful societal classification to consider all Keke riders as miscreants and this has led many young people to avoid the virtue of starting small businesses.

“I have always have passion for youth empowerment and employment,” he added.