Residents of Olosan Community in Leme, Abeokuta, in Ogun State have been living in anxiety since armed robbers informed them of a planned visit to their homes.

The robbers communicated their intention to the residents by pasting notices on walls around the community.

They warned of dire consequences if the police are informed.

In the notice, the gang, which described itself as ‘Oga Oga’ meaning ‘ master of masters,’ threatened to kill residents who fail to keep money for them (robbers) during the impending robbery.

The notice read: ‘Important notice to residents of Olosan community. 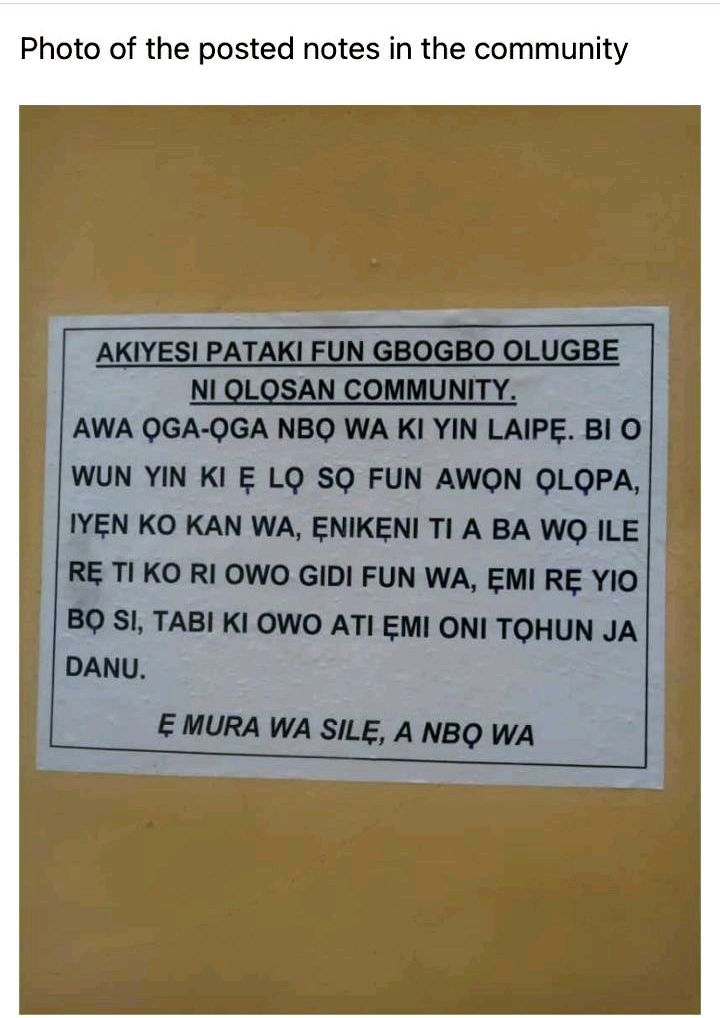 ‘We the boss of bosses are coming to greet you in no distance time , if you like, you an report to the police, that does not concern us. Whoever we visit and refuse to give good amount of money to us, shall be killed or the person might even lose both money and his life.’

Since the notice was pasted, residents have been anxious, returning home early and locking their doors by 8 p.m.

The Community Development Association also engaged vigilante groups who patrol at night. Some of the residents have also engaged guards to keep watch on their homes and properties.

The chairman of the community, who identified himself as Alhaji Ajetokun, said the notice by the unknown robbers took them unawares.

He said police have been informed and the area is being patrolled at night by a police team.

“In the morning we saw the notice posted around our area on walls and we became worried and as a result we have reported to the police and they have been patrolling this environment together with our landlords.

“Please help us beg them (the robbers), we don’t have money, please. We do not suspect anyone at the moment but they should please let us continue to live our lives in peace.”