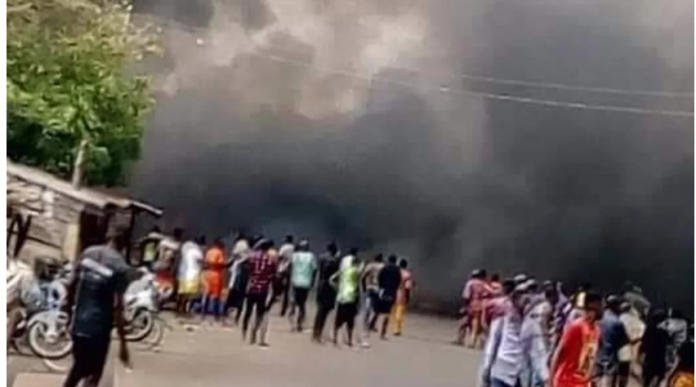 At least 12 persons have  been confirmed dead  in a tanker explosion which occurred at Oshigbudu village in Agatu Local Government Area of Benue State.

He said that the victims were eight males, three females and a little boy.

It was  learnt that over 100 houses were razed, scores killed and many declared missing after the explosion.

The tanker laden with petrol was travelling from Oweto and heading towards Otukpo when the driver lost control of the truck and it fell over, spilling its content at the Oshigbudu/Obagaji junction.

Ikwulono said, “It was a tanker explosion and over 100 houses in the community have been burnt down and many lives have been lost. Though we cannot place a figure on the number of deaths, they are actually many. The truth is that the death toll will be massive because you know that in a house you might have up to 10 persons if not more than that.

“And the houses that were burnt down are more than 100. So, in each of the houses, there must be a human being living or staying there. There is no way a house can be completely empty on a Sunday like this. So we have a huge crisis in our hands at the moment.

“The survivors are presently homeless and have lost all their property. Food will also be an issue for them because without a house how do you get food to eat. We are faced with a big challenge. The injured need help and the dead have to be evacuated without delay, so it is a very serious situation for us at the moment.

“I have already started seeing some of the burnt corpses and none of them can be identified.”

According to him, a statement will be issued subsequently, noting that he would inform the state governor, Samuel Ortom on the incident.

“The fire inferno at Oshugbudu in Agatu local Government, my local government of origin today, 18-04-2021 which has claimed so many lives and destroyed properties yet to be quantified, is the Chief of all the calamities that have fallen us this year,” he said.