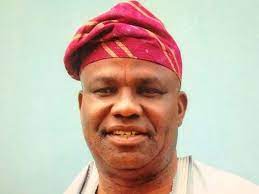 The representative of Ondo Central in the Senate Ayo Akinyelure has allegedly started retrieving the vehicles given to some Peoples Democratic Party (PDP) leaders after losing his bid to return to the upper house of the Parliament for the third time, according to New Telegraph.

Dissatisfied with the outcome of the primary despite the money and vehicles he reportedly used for the election, the legislator was said to have demanded his vehicles back from the leaders.

READ ALSO:Wike Blasts Obi: You can be the best Economist, but you don’t have character

An official of the party claimed that Akinyelure had retrieved the vehicles given to Chief Segun Adegoke, a member of the Board of Trustee (BOT) of the PDP and that of Mr Wole Akindiose, a former PDP Chairman in Ondo East and National delegate to the forthcoming convention of the party.

However, Akinyelure’s Media and Strategy Adviser, Charles Akinwon, said the Senator only retrieved the vehicle given to Akindiose because of the role he played during the primary.

Akinyelure had blamed the immediate past Governor Olusegun Mimiko for the loss on Monday.