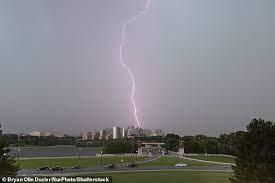 A non-profit worker has been named as the sole survivor of a lightning strike outside of the White House which killed three people.

Amber Escudero-Kontostathis, 28, had been canvassing tourists at Lafayette Park across from the White House lawn before the strike.

Her family says that she was forced to be put on a ventilator after the thunderstorm, and had been waiting for her husband to pick her up to celebrate her birthday.

She survived the strike which killed Brooks Lambertson, 29, a VP at City National Bank, and James and Donna Mueller, 76 and 75, who were visiting the capital for their 56th wedding anniversary.

The group hid under a tree during a summer storm which was subsequently hit by a bolt of lightning, with that flash caught on camera.

Amber was rushed to the hospital in critical condition and was put on a ventilator as she was struggling to breathe.

Her mother Julie Escudero confirmed that her daughter had managed to take a few steps yesterday evening after being taken off the machine.

She wrote online that they were trying to get counselling services for the volunteer, who is keen to get back to work as soon as possible.

Julie said: ‘Amber is literally blowing all the doctors away with the progress her body is making. She is leaving the ICU unit today at 4. She will stay in the burn center, but just not the ICU

‘Amber was able to take a few steps yesterday evening; it was painful, but her will is strong!!

‘Please pray that today she will be able to take a few more steps than she did yesterday.

‘Please pray for the pain to be manageable. She is in a lot of pain!! The nurses were taking her to the shower when we just got off the phone with us.

‘They told her that it will be painful. We also need prayers for us to be strong, calm, and say the right words to help relax her.

‘Her short-term memory is still getting better, baby steps. I feel like we saw improvement in that yesterday.

She did not ask the same questions every 20 minutes; it was about 2 to 3 hours in between. That is huge!’

The family added that Amber is ‘very scared’ and keeps asking what happened to her and is suffering from ‘survivor’s guilt.’

A GoFundMe has been set up on her behalf, to help her pay for the medical bills, and has raised more than $36,000.

Paying tribute to Lambertson, a statement from City National Bank said he had managed sponsorships for the bank for the last three years.

Previously he did marketing for the Los Angeles Clippers basketball team, with the bank saying: ‘Brooks was an incredible young man who will be remembered for his generosity, kindness, and unwavering positivity.

‘His sudden loss is devastating for all who knew him, and his family, friends and colleagues appreciate the thoughts and prayers that have poured in from around the country.’