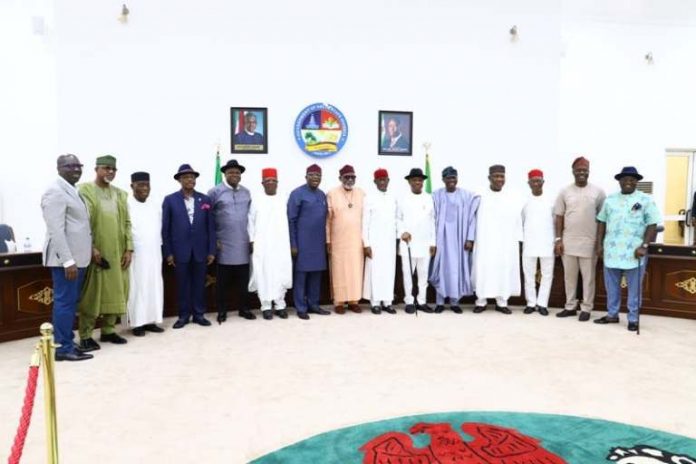 The Governors of Southern States of Nigeria have announced their decision to ban open grazing and movement of cattle by foot across the region to check incursion of armed herders and banditry.

Their decision was contained in a  communique at the end of their meeting in Asaba on Tuesday.

The communiqué read by Chairman of Southern Governors Forum, Gov. Rotimi Akeredolu of Ondo State, indicates that the prevailing insecurity in the country has presented severe security challenge such that citizens were unable to live normal lives, including pursuing productive activities.

The governors noted  that the precarious security situation  had threatened food supply, noting that the development and population growth had put pressure on available land and increased prospects of conflict between migrating herders and local populations in the South.

According to the governors,  the progress of Nigeria requires that urgent and bold steps be taken to restructure the federation to encourage evolution of state police, revenue allocation formula review in favour of sub-national governments and creation of institutions which would legitimately advance commitment to and practice of true federalism.

Those who attended the meeting were Governors Rotimi Akeredolu of Ondo, Nyesom Wike of Rivers, Babajide Sanwo-Olu of Lagos State, Seyi Makinde of Oyo State, Dapo Abiodun of Ogun, Kayode Fayemi of Ekiti and Ifeanyi Okowa of Delta, who was the host.

Governors of Osun and Cross River, Isiaka Gboyega and Prof. Ben Ayade were absent at the meeting.

The governors also urged the Federal Government to convoke a national dialogue in view of widespread agitations among various peoples “for greater inclusiveness in existing governance arrangements’’.

“The governors recommended a review of appointments into Federal Government agencies, including security agencies, to reflect federal character as Nigeria’s overall population is heterogeneous.

“The governors expressed concern on the continued gridlock on the Oshodi-Apapa Expressway and the chokehold it has exerted on the nation’s economy being the sole outlet from Apapa Wharf.

“The meeting recommended the activation and establishment of ports in other States of the federation to create new jobs and promote socio-economic activities in the country.

“The Southern Governors also expressed very grave concern on the security challenge currently plaguing the nation and strongly urged President Muhammadu Buhari to address Nigerians on the challenges and restore the confidence of the people,” the communique added.