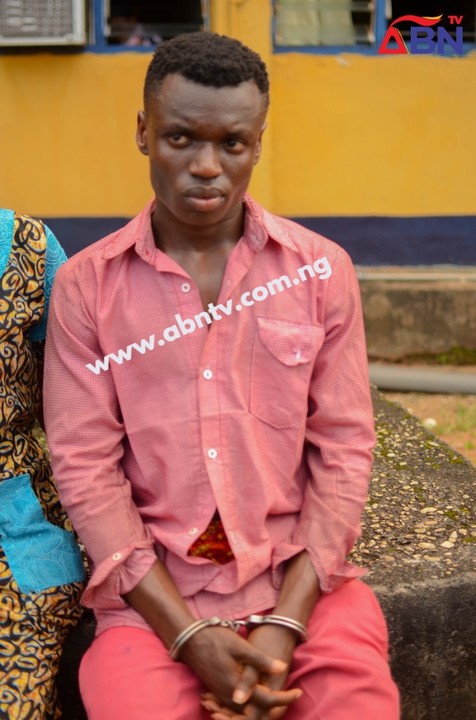 A Senior Secondary School 3 (SS3) student in an undisclosed school in Abia State, Obinna Nwatu, has been arrested by operatives of Abia State police command for staging  his own kidnap with intent to extort money from his mother, Mrs. Rose Nwatu whom he claims is stingy, ABN TV reports.

The  17-year-old suspect is a native of Obikabia in Isiala Ngwa North Local Government Area.

Briefing newsmen on Friday at the command headquarters Umuahia on Friday, Commissioner of Police in the State, CP Janet Agbede said on 19 September 2021, one Wisdom Nwatu m of Obikabia in Isiala Ngwa North Local Government Area, reported that on 18 September 2021 at about 1800hrs, his younger brother Obinna Nwatu m 17yrs of same address was kidnapped.

READ ALSO: PHOTOS As Tinubu Returns To Nigeria After Knee Surgery In London

According to the CP, Wisdom Nwatu further stated that his younger brother went to buy recharge card that evening when the purported incident occurred.

She said, “Anti-kidnapping unit of the Command while investigating the case, on 4 October 2021, arrested one Chinaza Favour Ukaigwe m aged 19yrs whose bank account was used to receive a ransom of Two hundred thousand naira (N200,000) only.

“He stated that Obinna Nwatu and one Favour Ugorji m a.k.a. “Wizzy” came to his shop at Aba Road Abia State and requested that he should give his bank account to enable them use and receive the school fees of their young sister. The investigation further revealed that Obinna Nwatu and Ugorji received through the account the sum of two hundred thousand naira (N200,000) paid in as a ransom by Mrs. Rose Nwatu (mother of Obinna Nwatu).

“According to Obinna Nwatu, he was not actually kidnapped. He conspired with Favour Ugorji m a.k.a. “Wizzy (now at large) to deliberately go into hiding at a hotel along  Rhema University Road Aba. Obinna Nwatu m, a Senior Secondary School 3 (SS3) student who lives in a boarding school decided to fake his own kidnap claiming that his mother Mrs. Rose Nwatu is stingy. Obinna Nwatu also claimed that he met Favour Ugorji online in 2017, but has never been to his house or know more of him than Facebook conversations.”