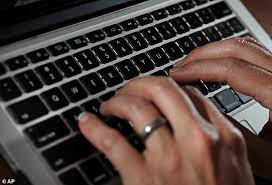 A ‘genius’ Bristol University student died in a fire at his cottage home after lithium batteries in his laptop exploded while he was asleep.

A coroner said the fire started in an ‘unidentified source’ in the 20-year-old’s bedroom.

The blaze was so intense that it destroyed the extended part of his mother’s home after the ceiling from his upstairs bedroom collapsed.

An experienced fire investigator found part of a laptop, a plastic welder, and some extension leads in the debris but senior Cornwall coroner Andrew Cox said none of them could definitely be said to be the source of the fatal fire.

But Mr. Cox said once the blaze had started the laptop batteries would have potentially exploded and become sources of ignition elsewhere in the property.

He told the Truro inquest: ‘Once the fire had started the laptop batteries would have contributed to the development of the fire.’

The inquest heard bedsprings were found under his body when it was recovered from the ground floor of the cottage which is situated in a narrow rural lane.

She was unable to say why Edward was unable to escape from the house but said ‘potentially’ he was in a very deep sleep when it began in his room.

Edward’s sister Esther told the coroner her youngest sibling was ‘a genius academically and musically’ who loved nature.

His father, retired GP Christopher Hughes, said his son was living with his mother at the time of the blaze, she had gone out swimming at a nearby beach when the fire happened.

Fire investigator Jason Dean said lithium batteries from a laptop can catch fire and are very volatile and explode.

He said they can set fire to bedding, soft furnishings and burn violently causing a blaze to spread quickly.

He said one of the most likely sources was a laptop catching fire – and the PC does not have to be plugged in charging when this happens.

Mr. Dean said this was one of the most severe house fires he had seen and said no accelerants had been used – but said he could not locate one of the four batteries from the burned laptop.

Police said the fire was not suspicious and no third party had been involved.