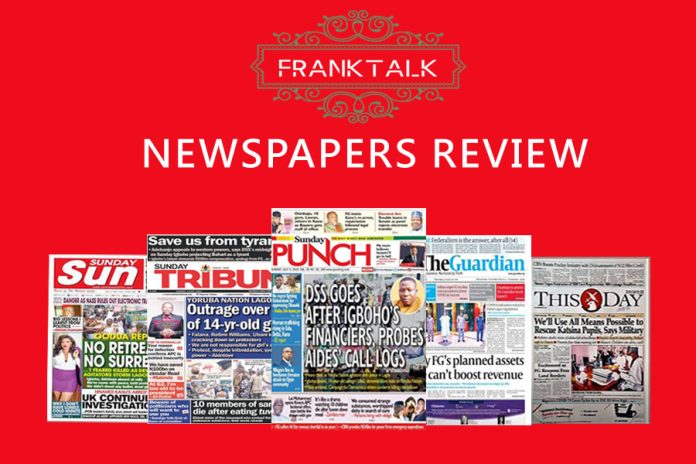 The politician who is also a former police officer died on Wednesday in his hometown of Ogbomoso at the age of 71 having been born on 3rd June, 1950.

Frank Talk Now reports Akala was the Governor of Oyo State between 2007 and 2011 under the platform of the Peoples Democratic Party (PDP).

Before he became Governor, Alao-Akala served as the Deputy Governor of Oyo State from May 2003 to January 2006 but emerged Governor in January 2006 following the impeachment of Governor Rashidi Ladoja.

He remained in office until December 2006 when the Supreme Court reinstated Ladoja.

2. ‘Buhari Govt Has Interest In My Case’ – Nnamdi Kanu Begs US, UK, UN To Attend His Trial

The leader of the Indigenous People Of Biafra (IPOB), Mazi Nnamdi Kanu, has asked representatives of the United Kingdom, United States, and United Nations to attend his next court proceedings.

Naija News reports that Barrister Ifeanyi Ejiofor wrote the letters to the two countries and the UN on behalf of the IPOB leader.

In the letter titled, ‘Request for delegate(s)/representative(s) to observe court proceedings …In Re: Charge NO. FHC/ABJ/CR/383/2015, Federal Republic Of Nigeria V. Nnamdi Kanu’, Nnamdi Kanu said the presence of the representatives would ensure fair hearing as the Muhammadu Buhari-led administration has shown profound interest in the criminal charge pending against him and the outcome of his trial.

He stated that officials of the present administration have made unsavoury comments about him, stressing that it has become important that truly democratic institutions of the world send representatives to observe proceedings of his trial.

3. APC Speaks On Indefinite Suspension Of Its National Convention

The ruling All Progressives Congress (APC) has debunked reports that it has postponed its planned National Convention.

The party in a statement on Wednesday signed by the National Secretary of its Caretaker/Extraordinary Convention Planning Committee (CECPC), Sen. John James Akpanudoedehe said the reports on the postponement of its convention is fake news which is sponsored by those who want to cause confusion.

Akpanudoedehe added that the APC under the leadership of Governor Mai Mala Buni won’t allow such people to distract it from carrying out its activities.

The statement further stated that plans are in the pipeline to organize a rancour-free National Convention urging party members and the general public to disregard any information that doesn’t originate from its official channels.

Governor Babagana Zulum of Borno State has asked the Nigerian military to focus on the Islamic State in West Africa (ISWAP) fighters rather than Boko Haram terrorists.

The governor stated that the reason is that ISWAP terrorists are better armed and equipped, more intelligent, and more sophisticated than Boko Haram members.

Zulum made the submission when he received members of the Senate Committee on Army at the Government House in Maiduguri, the Borno capital on Wednesday.

The governor said the growing presence of these foreign-trained terrorists in the Southern part of the state and other parts has become a source of concern for his government.

Zulum, however, commended the military and the Federal Government for their hard work in ensuring that peace returns finally to the state, adding that stability has been recorded in the agricultural sector.

He expressed his support for the continued combination of military warfare and political approach towards disarmament, deradicalization, and safe reintegration.

A company partly owned by former Vice President Atiku Abubakar, Integrated Logistics Services (INTELS) has reacted to the termination of its contract with the Nigerian Ports Authority (NPA).

Naija News reported on Tuesday that President Muhammadu Buhari cancelled the restoration of the boat pilotage contract following legal advice from the Attorney-General of the Federation and Minister of Justice, Abubakar Malami (SAN).

The termination was announced in a letter dated January 7, 2022, signed by the Chief of Staff to the President, Ibrahim Gambari, and addressed to Malami and the Minister of Transportation, Rotimi Amaechi.

Buhari, however, directed that the procurement process initiated by NPA be forwarded immediately to the BPP for action within 60 days to avoid further loss of revenue.

But in a statement on Tuesday, INTELS said that it has not received any notice of the termination of its service boat contract with the NPA.

The statement added that INTELS is relying on a freezing order issued by the Federal High Court, which confirmed the continuity of operations of the pilotage activity even after the expiration of the contract.

It stated that it does not consider the process of awarding the Pilotage contract closed, adding that its continuation in carrying out the contract is in the best interest of the NPA and the country.

6. 2023: Why APC Should Zone Presidential Ticket To South East – Umahi

The Governor of Ebonyi State, David Umahi, has revealed why the ruling All Progressives Congress (APC) should zone its presidential candidate to the South East.

Recall that Umahi, Chairman of the South-East Governors Forum, declared his intention to join the 2023 presidential race after a meeting with President Muhammadu Buhari in Aso Rock, Abuja.

Speaking on Wednesday during an appearance on Arise News, Umahi said the ruling party should zone its presidential ticket in 2023 to the South-East zone in the interest of equity and fairness.

The APC chieftain disclosed that zoning the ticket to the region would address the sentiment being expressed by all the sectors of the society and move the nation forward.

Umahi, however, stated that he “will not feel any sense of injustice” if the ruling party does zone its presidential ticket to his region.

Popular social media celebrity, Ismailia Mustapha, also known as Mompha, has been remanded in the custody of the Economic and Financial Crimes Commission (EFCC).

The two defendants were alleged to have laundered funds obtained through unlawful activities and retention of alleged proceeds of crime for a suspect Olayinka Jimoh (Nappy Boy), and unlawful transfer of funds for a record label, among others.

According to the anti-graft agency, the defendants laundered the sums of N5million, N32million, N120million and N15milion totalling over N6billion for the suspect.

The EFCC also alleged that Mompha concealed his crimes into expensive wristwatches and other movable assets valued at over an N70million.

January 19, 2022, has been scheduled for judgment in the fundamental human rights suit submitted to an Abia State High Court by the embattled leader of the proscribed Indigenous People of Biafra (IPOB) Nnamdi Kanu.

It would be recalled that the suit was attended to and concluded on merits on December 10, 2021, before Justice Benson Anya of the High Court of Abia State in Umuahia.

Naija News understands that Kanu’s Special Counsel, Aloy Ejimakor had in the suit prayed the court to declare the military invasion of the IPOB’s leader in September 2017 by soldiers as illegal.

Also in the suit, Kanu’s legal counsel prayed the court to fault Kanu’s re-arrest and alleged torture in Kenya.

9. 2023: I Don’t Need To Inform Buhari Of My Presidential Ambition – Moghalu

A former Deputy Governor of the Central Bank of Nigeria, Kingsley Moghalu, says he does not need to inform President Muhammadu Buhari of his 2023 presidential ambition.

The former presidential candidate of the Young Progressive Party (YPP) made this submission in a post via his verified Twitter handle on Wednesday.

Moghalu disclosed that he has informed Nigerians of his intention to run for President in the 2023 elections under the platform of the African Democratic Congress (ADC) and does not need to inform President Buhari.

President Muhammadu Buhari has given approval for the suspension on Twitter operations in Nigeria to be lifted.

The president’s directive was made public in a statement on Wednesday by the Chairman Technical Committee Nigeria-Twitter Engagement and Director-General National Information Technology Development Agency (NITDA), Kashifu Inuwa Abdullahi.

According to the statement, the lifting of the suspension on Twitter operations in Nigeria will be effective from 12 am, 13th January 2022.

Abdullahi explained that the approval was granted after a memo written to the President by the Minister of Communications and Digital Economy, Isa Ali Pantami.