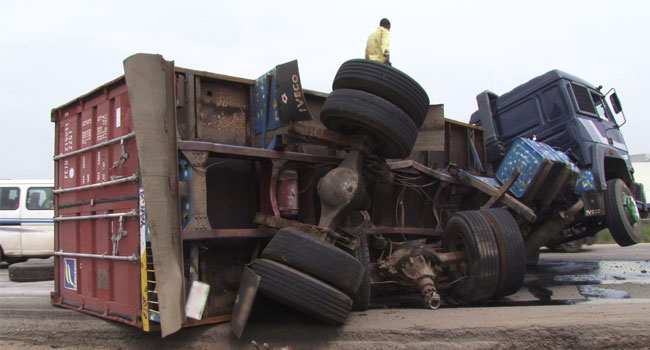 An unidentified secondary school student was crushed to death on Friday in an accident involving a truck loaded with cement around Sabo junction in Ilaro, Yewa South local government area of Ogun.
Mr Babatunde Akinbiyi, the Spokesman, Traffic Compliance and Enforcement Corps (TRACE), confirmed the incident to the News Agency of Nigeria (NAN) in Abeokuta.
Akinbiyi explained that the accident occurred around 1:12pm.
The TRACE spokesperson explained that the accident was caused by excessive speeding by the truck driver.
“According to eyewitness accounts, the  truck was coming from Ibese and heading towards Owode-Idiroko when the unfortunate incident happened.
“The driver of the truck lost control due to brake failure and crushed the student who was returning home from school.

READ ALSO: BREAKING : Derek Chauvin sentenced to 22 and half years in prison for murder of George Floyd

“Some students trooped out in their numbers and set the truck on fire.
“They also insisted that Fire fighters should not put off the fire and instead vandalised the truck,” he said.
He said that the deceased has been deposited at the morgue of the General hospital, Ilaro. (NAN)

Facebook
Twitter
WhatsApp
Linkedin
Telegram
Previous articleBREAKING : Derek Chauvin sentenced to 22 and half years in prison for murder of George Floyd
Next articleAll you need to know about Evelyn Joshua, TB Joshua successor

Mr Emmanuel Ige literarily walked into the dark valleys of death and survived to tell the story. Ige was kidnapped by ritual killers along the...
Read more
Edu Crime

Armed criminals on Thursday, attacked the Nasarawa State Ministry of Finance, Budget and Planning in Lafia and carted away N100 million. Eyewitnesses said that the...
Read more