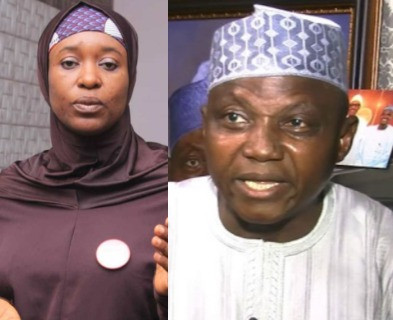 Aisha Yesufu has replied the Senior Special Assistant to President Buhari on Media and Publicity, Garba Shehu, who on Friday, March 26, said in an interview with Channels TV that nobody can bring down the Buhari-led administration because it is a democratically elected government.

”I want to assure Nigerians that the administration of President Muhammadu Buhari is addressing multiple challenges that are facing the country especially in dealing with security and yet we are still making progress in agriculture, economy, anti-corruption.

It is sad for the country that opposition is exploiting some of these things. It is quite unfortunate and I want to assure that the president remains focused in preserving the security and unity of this country.

We accept that dissent is allowed, this is a democracy and people have a right to tell truth to government but we must be careful in doing that. Nobody can bring down the government because this is a government elected democratically.

Government in a democracy come through periodic elections and if we have a government in office as we have, sponsored by political parties to win the elections, it is telling you that that confidence of the public is still there.” Shehu said

Ms. Yesufu in a video shared on social media said she totally agrees with Mr. Shehu. According to her, nobody can indeed bring the Buhari government down because it is already down.

Spokesperson to the President, Garba Shehu @GarShehu said nobody can bring Buhari's govt down and I totally agree with him. You cannot bring down what is already down. We are making demands to bring the government up and doing.
Full video in the linkhttps://t.co/Ln6V9pX5bM pic.twitter.com/liZuyfNvnQ