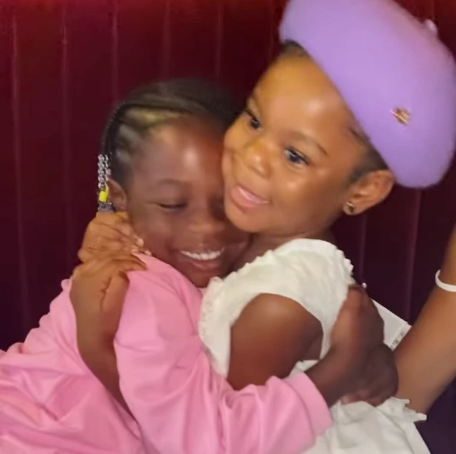 Patrick Nnaemeka Okorie who is well known by his stage name Patoranking is a Nigerian Reggae-dancehall singer and songwriter. He is doing amazingly well in his music career, with albums, many songs to his credit.

David Adeleke, also known as Davido in the entertainment world is another Nigerian sensational singer making the country proud in his own way.

Both artists are by far among the country’s greatest superstars putting Nigeria out there. These two powerhouses have a lot in common and one of them is being an amazing father to their children.

Patoranking has a daughter Wilmer whom he named after his album. While Davido has multiple children, his eldest is called Image.

READ ALSO:  I’m not interested in sleeping with many women — Rema

Patoranking posted an adorable video of Wilmer and Imade hugging each other. A voice asked if they are happy, Imade nodded and Wilmer said: ‘yes we are happy’. She said this in such a childlike and innocent manner that will melt your heart. Checkout some beautiful shots from the video: Davido commented under the post and said ‘me and you’. Patoranking replied: ‘I swear’. Both using laughing emoji: Amazing to see the next generation making connections at an early age.

Facebook
Twitter
WhatsApp
Linkedin
Telegram
Previous articleJoy As Chibok Girl Graduates From Top American University, Bags Prestigious Degree (Photos)
Next article‘Imagine someone trolls her the way she did to Toyin Abraham’- Netizens react to the arrival of Lizzy Anjorin’s baby