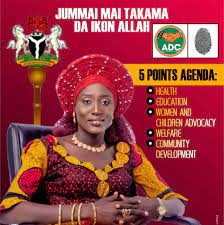 Hon. Jummai Zakka Gundiri is the Africa Democratic Congress (ADC) candidate for the Adamawa State House of Assembly, in this interview monitored by Franktalknow.com and AF24News’ Fred-Ahmadu Olamide, she talks about her challenges and how she hopes to win the electorate to her side.

How do you feel about your journey so far? Let’s start with that so I can get some background into where you are now and how you feel about how far you’ve gone.

Ok, first of all, I’m Mrs. Jummai Gundiri.  I’m a candidate for the ADC State House of Assembly in Gaya local government.

How do you feel so far about your journey in politics?

“Sigh” the Journey is somehow …, bad, trying, and challenging. You know, due to our gender, we are passing through so many challenges but we are still standing firm, we are not backing out, we must conquer and we shall reach the end.

What are some of the reasons that you think female candidates are not voted for as much by the electorate even if they are just as capable, if not more capable than the men?

So, are you saying that because women do not have as much propensity for corruption as men, that’s why people don’t vote them into power? Is that not why people are supposed to vote for them? Because they are not corrupt?

They are supposed to vote for us but you know in Nigeria, sorry to say this, Nigerians… let’s say the big people that are ahead of us, I don’t know who those people are, whether it’s INEC or whoever, I can’t really say who they are. But those kinds of people, don’t really like women or sincere people, that is a fact. Check it out. Now in Nigeria, frankly speaking, some of our candidates both women and even men, all of us know the perfect person but people don’t want the perfect people, the good ones. People prefer the old, corrupt, wretched ones. So I don’t know whether Nigeria is under a spell or curse. Seriously, I am disturbed about this particular thing because the way I see it, if you are not corrupt in Nigeria, you will not go far.

Especially in Adamawa State. Our gubernatorial candidate is one of the people that are sincere but we are only five females in Adamawa that won primary elections from all the political parties and you can imagine, one is gone. They just sent one away, I don’t even know what happened so we are now only four female candidates left in the whole of Adamawa State. From APC, PDP, ADD, all the parties. Only four women now. So, does that mean that all the females that ran for the election are not capable? We are capable but just because we are not dancing to their tune. So that is why I just say it’s because we are not corrupt.

Do you agree that the powers behind INEC manipulate the system, not the electorate?

Yes, we said almost the same thing. We are on the same page.

Okay, I think our voters need to be more enlightened and we need to do more to create awareness. Like I said before, 80% of our voters know that females are the best candidates because they are sincere. I think we need to do more awareness to bring us out so that we can stand for elections, free and fair so that we can take good people into the political position. Gradually, we will move.

Like here in my state, I’m super excited that one female won the Councilor ship position here in Adamawa State. So, we are going, slowly but surely, we are getting there.

So other than voter education and more awareness, is there any other thing that you think should be done to encourage more people to vote for female candidates?

There are other important things. Women need more mentorship so that we understand the game more especially women that have been in politics for a long time. Here in my state, we have three female senators, I think their tenure has ended. They have done it, they have served a full tenure as senators. And that’s just in my state. Every state has females in politics that have gone far, so, those people need to teach and coach those who are coming up just like the men are doing. Now, you will see every man in politics has a Godfather. Not only Godfather but a mentor and an adviser but we females are just like sheep with no shepherd. We need good mentorship.

How would good mentorship for women, for female candidates, translate into more votes to get them into these political positions?

By going to polling units, gathering females, be it any political party, tell the female electorate to vote for female candidates no matter the party. Women are more than half of the world’s population; we are not a minority. And in my case, in the north, women vote more than men. Also, most women are not financially buoyant. So, for a female to win, it will not be easy because now, Nigerians are attracted to money.

I think the question is “Why would men put their money down for women to be voted or campaigned for?”

We have a lot of women in politics that are ministers, senators, and the rest. So I am calling on them. They need to mentor the younger ones going. And for the men using their resources, I’m not saying that the men need to come and use their resources, no. I am saying that the women in politics that have been there before us, that are ex-senators, and ex-deputy governors, need to mentor females in their states. Not even to mentor the ones already contesting for the position of senator, no. You can start from the councillorship. If you see a woman struggling to get into a particular position, not necessarily with money but with ideas and the rest. You can win an election if God says your time has come. Without money, you can still win. Because this 2023, the way I’m seeing it, changes will come in Nigeria. That is what we are hoping for. I am married but I go out. I’ve gone out by 6 am and come back by 10 pm, sometimes my husband comes with me. From house to house, doing door-to-door campaigns. It’s true there are corrupt women as there are corrupt men. I still believe that 80% of women are not corrupt. There are truthful and sincere women. I can beat my chest on that. Maybe 70% but more than half of the women are more sincere than the men in politics.

What can female candidates do for themselves to put themselves in the forefront without engaging in corruption so that people can actually vote for them?

I think it is important to do door to door campaign. You need to go yourself and take a minimum of 10 people with you. We women, there is a way we beg our husbands when he’s angry that he’ll calm down. So in the same way, go to your people and beg them. Just tell them the truth. Tell them that when you are there, you will work for their mandate, tell them you need their support. I’m not even planning to do any vote buying because honestly speaking if I had extra money from my campaign, I would rather invest it in the hospitals that don’t have water.

What are some roles that women groups and civil society organizations can play to rally around capable women and get them into these positions?

Why I Dumped APC – Beatrice Nkwuda