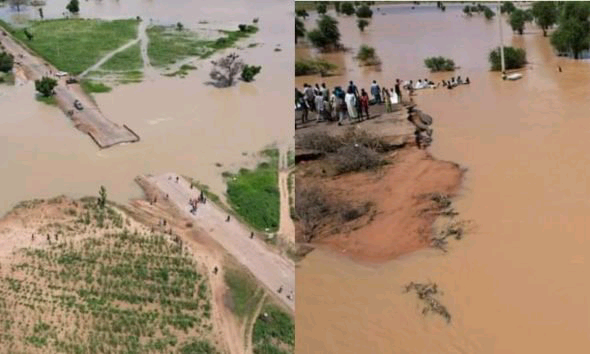 Yobe Emergency Management Agency (SEMA) disclosed that recent boat mishaps have consumed the lives of 10 families in the Jumbam community of Bursari Local Government Area of the state.

Executive Secretary of the agency, Dr. Mohammed Goje, made the disclosure while briefing Governor Mai Mala Buni during a sympathy visit to Jumbam and other communities washed away by floods, disconnecting several roads, towns, and villages.

While in Jumbam, Gov. Buni commiserated with the District Head and community members over the colossal loss of lives in boat mishaps.

He further called on the community leaders, security agencies, and other gatekeepers to sensitize their community members on proper ways of using boats in an emergency situation, as he directed the immediate reconstruction of the roads.

According to Goje, Jumbam in Bursari LG and Kaliyari in Tarmuwa LG, both recently experienced heavy flooding leading to colossal loss of lives in boat mishaps, loss of livestock with over 180 households, and 752 hectares of farmland destroyed.

“This is coming at a time when Girgir to Karage; Girgir to Kajuwa; Kajuwa to Jaliya as well as Jaliya to Garin Malam Roads linking to Gashu’a have all been disconnected as well.

He further stated that, the SEMA team led by the Executive Secretary is conducting assessments and responding to the victims’ immediate needs, while affected LGA Chairmen are reviewing available resources to support more victims and take remedial measures to restore movements along the affected corridors.