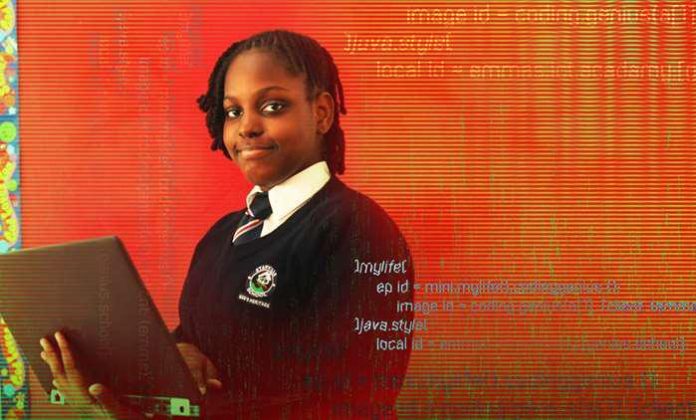 A 13-year-old Nigerian-born Emmanuella Mayaki has set a new record as one of the youngest persons to be accepted into a University in the U.S.
The News Agency of Nigeria (NAN) reports that Mayaki was accepted into the Programme for the Exceptionally Gifted (PEG) at Mary Baldwin University, U.S. to study Computer Science in the spring.
Mayaki”s letter of admission made available to NAN in Benin reads,” Dear Emmanuella, congratulations on your acceptance to the Programme for the Exceptionally Gifted(PEG) at Mary Baldwin University! Welcome to the PEG class of 2026.”
She scored a 91 percentile mark of 1,300 in her Scholastic Aptitude Test (SAT).
One of Mayaki’s personal accomplishments at age 11, in the year 2020, was the opening of an ICT Academy for girls in Abuja, Nigeria.
The academy was her mission to provide sustainable empowerment for the girl child to acquire digital skills and close the gap in digital literacy, and for training and equipping youngsters in digital technology.
Mayaki said the Academy had a vision of securing the future of the girl-child.
The academy, named ‘CodeKid’, which was incorporated under the Companies and Allied Matters Act 1990, on the second day of December 2020, with the registration number (RC: 1741234), was set up to train the girl-child on the basics of computer literacy from simple Microsoft Word, Excel and PowerPoint functions to the more complex skills like programming and coding.
The young tech developer and the programmer has always nursed a strong drive to share knowledge and positively impact people, especially the girl-child.
This led to her decision to launch the after-school, weekend, and holiday club in Nigeria. Mayaki noted that this programming school was influenced by her experience with the United Kingdom (UK) after-school club experience, which she successfully duplicated in Nigeria.
Her focus is on the girl-child, who falls within the age range of 6 to 15, which includes a beginners’ class to Information and Communications Technology (ICT).
Here, newbies to the endless possibilities of ICT are tutored on Introduction to Computer, Microsoft Word, Microsoft Excel, Microsoft PowerPoint, Desktop Publishing, WordPress, Graphics design, HTML, CSS, JavaScript, PHP, and MySQL, among others such as object-oriented programming – Python and Java.
In addition, Data Science Nigeria, invited young Mayaki as a guest speaker during their Interactive Workshop for kids and teens with the theme, “How to start a future in Data Science and AI”.
Besides, in May 2022, she was nominated as a STEM icon by STEM Kids New York City (NYC). The organisation went on to name her as their inspiration after researching social justice issues around their target audience for their app.
Mayaki was first offered a teaching appointment in the United Kingdom while she was aged 11 at the Southfields Primary School in Coventry, England.
Her preferred area of study is in the field of Computer Science.
NAN reports that her passion for Information and Communication Technology began from the basics of desktop publishing which includes Microsoft Word, Excel, PowerPoint, and Corel Draw came when she was aged just 7.
Her passion and rapid rate of learning the basics encouraged the young Mayaki to gain more knowledge about programming languages and augmented reality through online courses from SoloLearn and Udemy.
Some of the courses and certificates she obtained in pursuing this preferred career are a certificate in HTML fundamentals course, a certificate in PHP tutorial course, a certificate in CSS fundamentals course, and a certificate in SQL fundamentals course.
Also, she obtained a certificate in the JavaScript tutorial course and a certificate in the JQuery tutorial course. She went further to obtain a certificate in Logic Building, Python, and Java programming.
Mayaki was nominated to be featured as a recipient in Microsoft’s Legacy Project Virtual Museum’s Women’s History Month Experience in the year 2021.
She was also identified as one of the most influential, ground-breaking female change-makers of our time, and an inspiration for young girls around the world.
In the year 2021, she was featured in CBBC’s My Life series for International Women’s Day.( NAN)