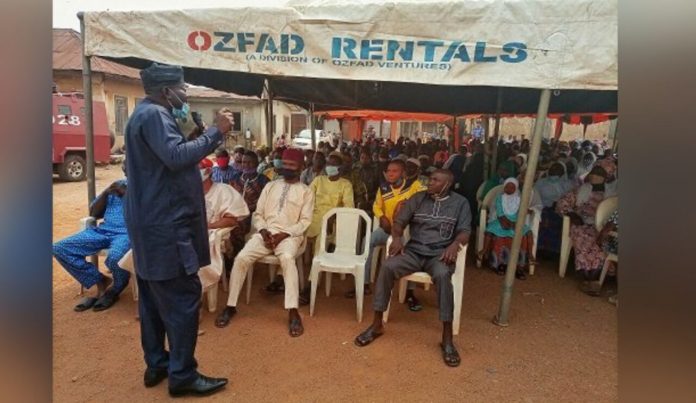 No fewer than 182 artisans and 16 students in Ailaka’s Compound in Ede, Osun State benefitted from N50 million empowerment programme of a philanthropist, Mr Abdulkabir Alliu on Saturday.

The empowerment programme was coordinated by Mexico Ambassador-designate, Hon Adejare Bello and other members of the family of the philanthropist.

“The amount involved in this empowerment by Mr Alliu is N50 million. We started the selection process for the beneficiaries about four weeks ago.”

Bello noted that the philanthropist also gave N1.6million for the compound to sink a borehole. He also revealed that N50 million will be disbursed in weeks at Akaje’s Compound in Ede for another empowerment.

The Osun State Governor, Mr Adegboyega Oyetola, in his address urged the beneficiary to judiciously make use of the grant.

Oyetola who was represented by the Commissioner for Youths and Sports, Hon. Yemi Lawal, said, “the empowerment will help the economy of the state noting that the government is set to empower over 120,000 residents.

The Oyo State government says over 100 candidates from the state would benefit in the first tranche of the Nigeria-Sao Tome and Principe Joint...
Read more
Scholarships

Foremost institution,Trent University – Canada is providing the International Remembrance Scholarships to high achieving students who are passionate about studying a degree program at...
Read more