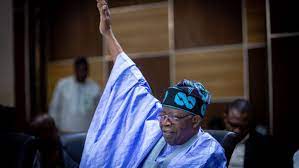 The director of strategic communication in the All Progressives Congress (APC) presidential campaign council, Dele Alake, has said that the party’s flagbearer, Bola Tinubu made his money from buying stocks in blue chip companies abroad.

Alake spoke on Sunday during an interview on Channels Television.

Answering a question on the source of Tinubu’s wealth, Alake said the former Lagos governor was not a “pauper” before he became a senator in 1992.

He said, “I knew him to have been spending money even before he got to the office. In 1991, he was going into politics, he contested a senatorial election — Lagos west — and he won,” he said.

“Most Nigerians know that contesting elections in Nigeria is not a child’s play. Paupers don’t contest elections. How much more a senatorial election?

“He must be a man of some means. In fact, before then, he had been contributing to political organisations and causes before he took up the gauntlet and went into the senate.

“He polled the highest number of votes nationwide in that senatorial election of that year and became a senator in 1992.

“Fast forward to 1993, we started the June 12, he was in the Yar’Adua’s caucus — the Peoples Font — within SDP at that time. He was also funding. He was not a pauper.”

Alake said those questioning Tinubu’s source of wealth are expressing their “hatred”  for the former governor.

“What I know is that right from his days in the corporate world, he has been trading in stocks even in foreign currencies.

Asked about the specific companies the former governor has an interest in, he said, “He has been buying stocks, bonds, and all of that. I’m not a finance person. I’m not going to be interested in the nitty-gritty of it all.

“But I know he has been trading in stocks. He was buying stocks of blue chip companies and all of that. He was making money and spending money. He has been doing all of these years before he got to the office.

He is about the only one of the class of 1999 who is at that enviable height, politically. He is bound to attract all of these negative comments.”

Asked to clarify if Tinubu owned the Alpha Beta company, the firm that is in charge of collecting tax on behalf of Lagos State, Alake said he could not confirm that to the best of his knowledge. He however said the ownership should not be the issue but the important thing should be that the firm was able to increase Lagos government Internally Generated Revenue.