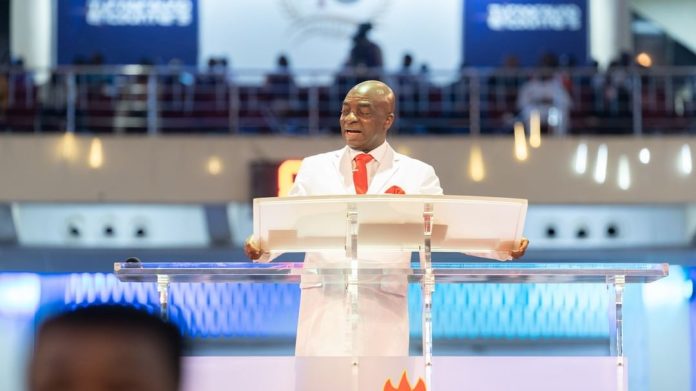 Dr David Oyedepo, founder of Living Faith Church Worldwide (Winners Chapel) has spoken concerning the political climate in the country ahead of the 2023 presidential elections.

The bishop expressed during a Sunday sermon on Sunday that God can pick Nigeria’s president from the megachurch.

In what seemed like pointed remarks towards political aspirants cropping up ahead of the 2023 general elections, Oyedepo charged his church members to “stay where they are sent”.

Speaking during the church’s special prophetic fasting service, the senior pastor said, “There are many who have no business going into politics. They just wander there, get beaten and battered. They return wounded. ‘God led me’. No. Your appetite led you.”

Oyedepo also told worshipers to seek counsel should they aspire for running for any political office ahead of 2023.

“And it is important for me to mention to members of the church because another time is here now. You better ask counsel of the priest before you torment your life by yourself,” he said.

[READ ALSO] Bishop Oyedepo: Don’t Name Anything After Me In Winners Church When I Die

“What office will you win election to that I will now need you? No. My eternal helper is up there, and they know if I have ever asked a thing of anyone. Allow God to lead you. Don’t let greed and avarice lead you,” he continued.

The wealthy preacher also criticized political aspirants who had never contributed to society but intended to run for office.

He said, “Somebody has never helped anybody in his life, what is he going to do in politics? Never sent anyone to school, never gave bread to anyone that is hungry, and he’s going to look for the welfare of people?

“Don’t get me wrong, God can pick a president from this church. That President could even be a female. But you will see the clear hand of God upon such individuals.”

He also criticized the mass migration of Nigerians to foreign countries.

“Many are running the craze now: ‘I must go abroad’. To do what? They say, ‘I don’t know. when I get there I will know.’ Is that how to live as a child of God? What if I fled when I was tempted to?”