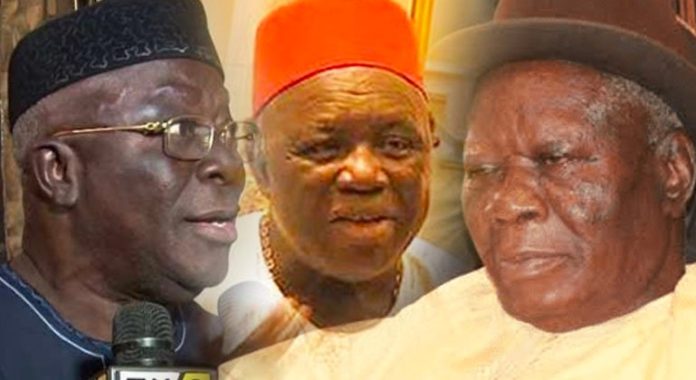 The Southern and Middle Belt Leaders’ Forum on Thursday met in Abuja and declared that political parties that field northern presidential candidates won’t enjoy their support in the 2023 general elections.
Those at the meeting include delegations from the four regional socio-cultural organisations: Afenifere (South West), Ohanaeze Ndigbo (South-East), Pan Niger Delta Forum (South-South), and the Middle Belt Forum (Middle Belt).
The leaders include Chief Ayo Adebanjo (Afenifere), Prof George Obiozor (Ohanaeze) Dr. Pogu Bitrus (Middle Belt Forum), and Chief Edwin Clark (PANDEF).
In a communique issued at the end of the meeting and signed by the leaders, they agreed on the country’s indissolubility and the need for restructuring.
They also maintained that power must shift to the Southern region after the eight-year regime of President Muhammadu Buhari in May 2023.
The communique partly read, “Arising therefrom, the meeting resolved as follows:
“That the extant Constitution and Structure of Nigeria are grossly flawed and lopsided, accordingly, Forum restates its demand for the fundamental restructuring of the country by enacting a new Constitution that would enthrone equity, fairness, and justice. It must be One Nation, One System;
“Cites that the northern part of the country would have fully enjoyed the Office of the Presidency of the country for the full statutory period of 8 years by 2023, hence, the presidency should rotate to the South;
“Therefore, unequivocally, and in full resolve, call on all political parties in the country to zone their presidential tickets to the south;

“Advice that any political party that does not zone its presidential ticket to the South should not expect support from the four regions;
“Notes that the basis of any viable democracy, especially in a diverse and complex country such as Nigeria, is fair and even sharing of power.”
The Southern and Middle Belt leaders also condemned the continued senseless killings of innocent citizens across the country by terrorists and criminals, especially in the North West Zone, and called on the government and security agencies to redouble efforts to safeguard the lives and property of Nigerians.
They cautioned the National Assembly to only give consideration to bills that would promote equity, justice, peace, and national cohesion instead of issues that will exacerbate conflicts and crises in the country.
Several presidential hopefuls have emerged from the Southern region in the last few days including All Progressives Congress National Leader, Bola Tinubu; media personality, Dele Momodu; former Secretary to the Government of the Federation, Pius Anyim; Governor of Ebonyi State, Dave Umahi; former Governor of Abia State and Majority Whip of the Senate, Senator Orji Kalu; former Deputy Governor of the Central Bank of Nigeria, Kingsley Moghalu, among others.
A few northerners including ex-Vice-President Atiku Abubakar; and former governor of Kano State, Rabiu Kwankwaso, — both of the Peoples Democratic Party — have been rumoured to nurse presidential ambitions but they are yet to publicly declare the intention to run.
Though party primaries that would lead to the emergence of candidates are expected to hold later in the year, permutations, political bickering and serial defections continue as the race for who succeeds Buhari gets intense, while Nigerians wait with bated breath to see who would occupy the exalted office in Aso Rock in 2023.

Facebook
Twitter
WhatsApp
Linkedin
Telegram
Previous articleISWAP fighters assault Borno Army Institute, bring down flags
Next articleLeaders must do the best for their people within limits of resources -Buhari