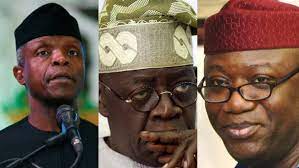 The Oodua Peoples Congress has debunked reports linking it with the presidential ambition of some southwest politicians in 2023.

OPC’s spokesperson, Yinka Oguntimehin in a statement on Monday said that what Nigeria needs to be better is not the likes of Vice President Yemi Osinbajo, former Lagos Governor Bola Tinubu, and Ekiti Governor Kayode Fayemi to be the next president.

According to OPC, whoever succeeds President Muhammadu Buhari in 2023 will not make much difference without the restructuring of the country, hence the group insisted that what Nigeria needs is restructuring.

It wants the country to adopt the 1963 constitution which allows each region to develop at its own pace.

Oguntimehin made the submission while distancing the OPC from an alleged mega accord of 57 civil society groups rooting for a southwest presidential candidate.

The OPC said it’s not a political group nor is it mobilizing for any politician or party and those dropping its name are only out to defraud members of the public.

“We are aware that when elections are approaching, some politicians usually use the OPC’s name to curry favours.

“There are some groups that are affiliates of political parties that usually make themselves available for politicians as at when due,” Oguntimehin said in the statement.

He added that even with an angel in charge of Nigeria, without restructuring Nigeria may not make any meaningful progress.

“When anything happens in Yorubaland, you don’t hear their voices, except during elections or when they are paid to issue statements against us.

“Even if an angel emerges the president of this nation today, without restructuring, nothing will change for the better.

“Our position on the future of Nigeria is clearly stated in our belief in restructuring. That is why we root for regionalism as the best option for peace and stability,” the statement added.