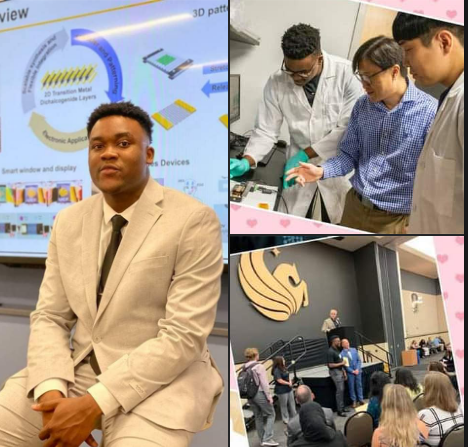 Emmanuel Ebube Okogbue a 23-year-old alumnus of the Federal University of Technology Akure, FUTA has successfully defended his PhD in Electrical and Electronics Engineering (Nano Electronics option) Friday, April 9, 2021, at the University of Central Florida at Orlando, Florida USA.
Okogbue Graduated from FUTA in 2017 with a BTech in Electrical/Electronics Engineering, Second Class Upper Division (2:1) with a CGPA of 4.48.
Okogbue spent four of the five years of his undergraduate degree program in FUTA and spent his final year in the USA.
He benefited from the collaboration between FUTA and the Florida Agricultural and Mechanical University, Tallahassee, Florida.
This enabled him to conclude the final year of his undergraduate degree program at FAMU in the 2016/2017 session. He earned a FUTA degree in accordance with the principles of collaboration.

After his degree program, Okogbue enrolled for his PhD in August 2017 having qualified to do so through his sterling performance during his stay in FAMU.
He was admitted into PhD with the first degree though he was awarded Masters degree after some course work and a few publications.
Before his PhD defence, he published 13 journal papers and won several awards.
The Vice-Chancellor, Professor Joseph Fuwape, has congratulated Okogbue.
He described the feat as another testimony to the excellence of FUTA and its products saying FUTA graduates can hold their own anywhere in the world.
See Pictures;