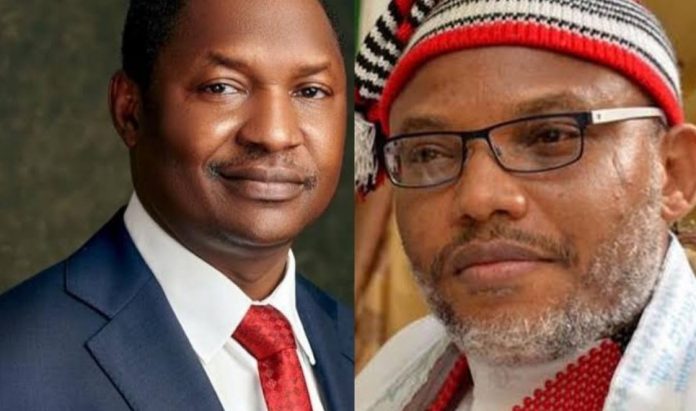 Nnamdi Kanu, the leader of the proscribed Indigenous People of Biafra, was, on Tuesday, brought back to Nigeria to continue facing his treasonable felony trial which he fled from almost six years ago.

“Recent steps taken by the Federal Government saw to the interception of the fugitive Kanu on Sunday,” the Attorney-General of the Federation and Minister of Justice, Abubakar Malami, announced triumphantly on Tuesday.

Mr Malami said, evasively, at a press conference that Mr Kanu “has been arrested through the collaborative efforts of Nigerian intelligence and security services.”

According to Premium Times, he did not take questions from reporters yearning to throw more light on the development for Nigerians.

The news hit many Nigerians like a thunderbolt on Tuesday, especially as Mr Kanu’s recent history on Twitter shows he has relentlessly tweeted every day up till Monday, except last Thursday and Friday.

Fraught with vague remarks on important issues on

Many have also raised concerns about the legitimacy of the procedure adopted in bringing the IPOB leader back to Nigeria due to too little official information on the matter.

At the end of Mr Malami’s press conference, which was immediately followed by a court appearance put together to obtain an order for Mr Kanu’s detention in the custody of the State Security Service (SSS), what was clear was that the IPOB leader was back in the country after almost six years abroad.

2.When did he arrive Nigeria?

3.Where the airplane landed?