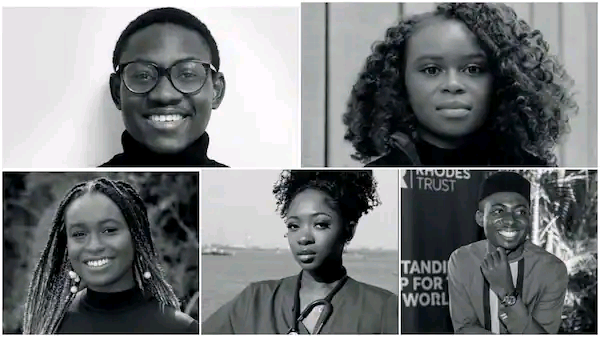 Out of the pack, there are five Nigerians on the list. These are people whose years of academic records really speak for themselves.

Folu Oguneye–  When she was in Cambridge, Folu was a mentor to other students who wanted to come into the university.

Despite the financial burden her family was facing, she was able to balance work with schooling.

At A-level, the lady was able to get multiple distinctions, a feat that saw her getting a place at the University of Cambridge. She is now the CEO of Vamos Careers with a team of six.

Hope Oloye —- She was a precocious child. At the age of 13, she attended a lecture on neuroscience at the University College London.

That lecture made her fall in love with neuroscience and no wonder that was what she would study later at the University of Oxford.

She was among 300 people selected for the much-coveted fully funded Junior Research Fellowship at New York University.

Khadija Owusu grew up in the UK. In March 2012, she was invited to the White House by the then-American first lady, Michelle Obama for the exceptional essay she had written about her mother.

When she was in her third year at the University of London, she co-founded a charity called Melanin Medics.

The aim of the organisation was to give more voice to black and Caribbean students in the medical profession. The organisation later got £20,000 (N11,382,088.17) from the British Medical Association.

Nwangele Godwin (Emeka) Chukwuemeka Emeka who was born in Jos did his first degree at the University of Nigerian Nsukka (UNN) where he later finished as the best graduating student.

After series of achievements, he became a Rhodes scholar and went ahead to study for his masters in energy systems at the University of Oxford.

He has together with Enugu State Scholarship Board created Coal City Fellowship.

Segun Afolaranmi — The young man grew up in Lagos. His parents are petty traders. Segun is not only good with books, but he is also an amazing public speaker.

After secondary school, he took his A-Level in biology, physics, and chemistry where he had straight As and got admission into the University of Ibadan.

During his graduation from school, he got over 30 awards for his excellence. He is the co-founder of a youth-based organisation called The Ganglion Initiative. He later got a Clarendon scholarship for his masters at the University of Oxford.

10 Women That Have Made Nigeria Proud Globally