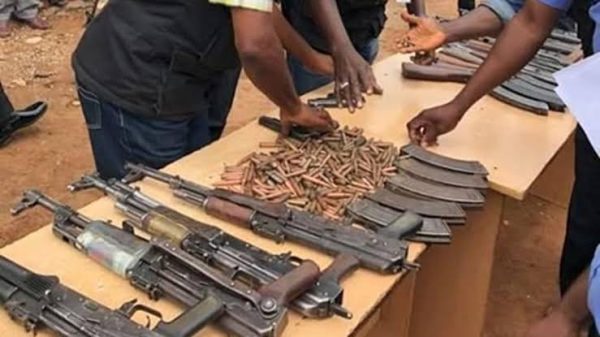 It was learnt that a combined team of policemen and vigilantes in Ozoro Community in Delta State, led by CSP Ogedengbe Areguamen,  arrested the 77-year-old gun runner, with one 28-year-old Emma Ighodalo in the state.

The police said Ighodalo was arrested with one live cartridge while two other members of his criminal gang escaped.

READ ALSO: Monarch’s Brother Kidnapped By Unknown Gunmen On His Way From Farm In Kwara

This was confirmed the report in a statement signed by the Police Public Relations Officer, DSP Bright Edafe.

He said, “Upon interrogation, the suspect confessed that he threw his gun away somewhere in the bush as he was running and that he bought the said gun from One Michael Enipozi for the sum of ₦30,000.”

According to DSP Edafe, “The suspect led the Police to Irri village where the said Michael Enipozi ‘m’ of Irri in Isoko south LGA aged 77yrs was arrested.

“Three double-barrel guns, two single barrel guns, and other tools used in producing guns were recovered from him.

“Preliminary investigation revealed that the 77yrs old suspect is a welder who produces guns for criminals and he admitted that he sold the gun to the suspect and that he has been in the business of producing guns for the past twenty years.

“Manhunt for the other two fleeing suspects is ongoing.”