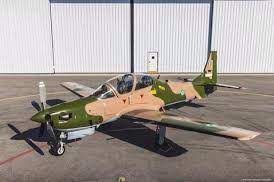 The Nigeria Air Force has taken delivery of the first batch of their A-29 Super Tucano aircraft.

It touched Nigerian soil on Thursday at around 12.34.p.m.

The A-29 is a Brazilian turboprop light attack aircraft designed and built by Embraer as a development of the Embraer EMB 312 Tucano.

The A-29 Super Tucano carries a wide variety of weapons, including precision-guided munitions, and was designed to be a low-cost system operated in low-threat environments.

The new aircraft is one of the six aircraft expected to leapfrog through 5 countries of Canada, Greenland, Iceland, Spain and Algeria before arriving at their final destination in Nigeria.