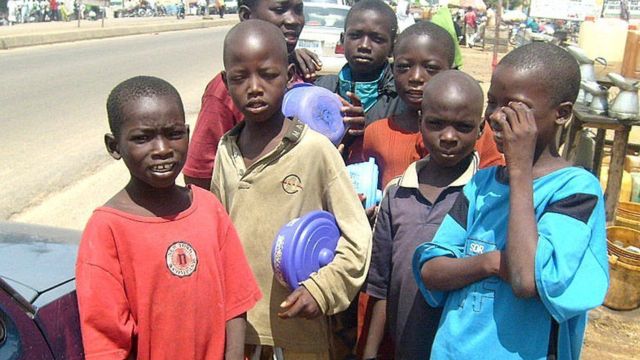 Nigerians have raised concerns about the growing number of abandoned school-age kids who are supposedly in search of nomadic Arabic education- Almajiri.

This call was after trending but disturbing photos were uploaded online, depicting children between the ages of six to 10 years old, sleeping beside gutters, sitting on roadsides in large numbers, some begging for alms and others struggling for food.

The disheartening pictures which were posted on Sunday, fuelled ardent calls from Nigerians on Twitter, for the government to take critical actions to curb the rate of child abandonment in the name of Almajiranci education.

Seeing these pics is disheartening 😔
I hope the North will be wise and stop this. Until you see a 4 year old Almajiri wearing torn clothes, begging for food without shoes, in a cold season, u will never understand the depth of the problem. ALLAH yasa mudace… pic.twitter.com/b67eZduiCI

The Hausa word Almajiri is derived from the Arabic word, المُهَاجِرْ “al-Muhajirun,” which refers to a person who migrated from his home in search of Islamic knowledge. Hence, the Almajiranci is a system of Islamic education majorly practised in northern Nigeria. A boy seeking Islam knowledge is called Almajiri, while the girls are called Almajira.

Raising concern on the entire system, a Twitter user, Jalo Abba II with the handle @abba_jalo asserts that the North has 9.5 million roaming students for achieving Arabic education.

Abba said,  “The North has 9.5 million Almajiri children roaming the streets foraging every petrol and traffic junction begging for food in the name of Islamic scholarship each day of the week. Yet, anyone who speaks against this practice gets attacked & portrayed as an Ignorant Muslim.”

Abba also raised concerns that the neglect of these kids is the fuelling potential hoodlums in future.

Abba in a series of tweets lamented how the country is breeding a set of dangerous gangsters through abandonments and insensitivity.

He said, “Yet and yet, we wonder why we have some of the highest illiteracy rates in the world, we are confused as to how Boko Haram and bandits found easy converts in our midst. We are shocked researchers have described our society as one of the poorest places on planet earth.”

Another tweep, @Sir_balemoh called for the scrapping of the Almajiri system, stating that it is not functional.

He said “Almajiri system is what has kept the North as the den of crime, drug abuse, insurgency, poverty, illiteracy and all other forms of societal vices. Almost everything bad in Nigeria is prevalent in the North thanks to this system that has been embraced for long. It must end !”

Also, Amb Isah Babayo called for the restructuring of the Almajiri system.

If you think this is ok as a parent then you definitely need to consult, all what we need is restructure Almajiri system. nafisa has important message to share. pic.twitter.com/T8goGoVMnW

Babayo tweeted, “If you think this is okay as a parent then you definitely need to consult, all what we need is to restructure the Almajiri system.”

AF24NEWS also observed that the Almajiri trend which began on Saturday was sparked by a tweet from a Twitter influencer, Nafisat Abdullahi, @nofisatofficial, who unequivocally blames littering kids on parents allegedly giving birth to children they cannot cater for.

Stop giving birth to children you know you’re not capable of taking care of 🤦🏾‍♀️.

The tweet which has come under fire generated so much heat on social media with users citing that the government is to blame, and not parents in the North.

During the President Goodluck Jonathan administration, about 200 Almajiri schools across the North were built to address the staggering number of out-of-school children in the region. However, there are reports that these structures have either been used for conventional education or lay waste because their pupils have gone back to the old ways of street begging.

The present administration of President Mohammadu Buhari, who many believed would take up the Almajiri school project, seems uninterested or has more important issues to tackle.

The leaders of the Arewa Consultative Forum, have continually decried the abandoning of the Almajiri school projects.

They faulted the various northern state governors for not building on the legacy of the past government by building more schools that would help in improving the Almajiri’s educational and social status, rather than allow them to fall into the hands of Boko Haram insurgents, bandits and kidnappers currently terrorising the nation.

“There should have been a follow-up on the Almajiri Schools by northern governors but they didn’t. There was no follow-up and today, the schools are dilapidated, they are not doing well at all”, said ACF National Publicity Secretary, Emmanuel Yawe.

Yawe cited that the school built by the Jonathan government along the Zaria-Kano road with billions of naira public funds has been left to rot, without any step taken to address the menace of the Almajiris in the society.

“It is actually the fault of northern governors and I hope one day, they will wake up and realise the damage this has done to the region. There was a time in Kano when the state government established the Kano Foundation. One of the principal purposes of the foundation and the school was to integrate the Almajiri system into the western educational curriculum, but it was not followed up.

“Almajiri as it is now, is a big security problem to the whole country and we pray that northern governors will be serious about it,” he added.

BBNaija’s Doyin Reveals What Attracts Her To A Man